A computer worm is defined as the malevolent cyber infection which is able to infect several computers at the same time. Specifically, its distinctive feature lies in the ability to multiply itself and deliver the malevolent content to the targeted users. Usually, you may encounter computer worms in the spam messages disguising under supposedly amusing videos and images. Alternatively, it lurks in the infected domains such as P2P file sharing websites. Vital security flaws pave the way for these cyber threats to infiltrate the device as well. Furthermore, worms deteriorate PC performance. The longer the computer threat resides on the system, the more chances appear for it to access personal information and transfer it to cyber criminals. Overall, worms are quite flexible. They should not be underestimated as they can be the mediators of more severe virtual threats.

The ability to replicate themselves is what makes worms such troublesome and destructive cyber infections. This method allows them to occupy thousands of computers in a moment. After analysing numerous examples of this category, virus researchers were able to distinguish three main distribution tendencies:

Unfortunate for Windows OS users, a worm often targets exclusively this operating system. Mac OS owners can exercise less caution. However, it is unwise to think that there are no devastating threats designed for the users of the latter operating system.

How does a worm work after infecting the device?

The first signs that your computer security has been compromised are slower PC processing and browser capabilities. Furthermore, this phenomenon might be followed by browsing issues, such as redirects to unsafe domains, and underperforming system programs. Furthermore, a computer worm makes the computer more vulnerable to outside cyber assaults. Some samples of this malware can even meddle with security programs resulting in their forceful shutdown. Backdoors and rootkits may often accompany worms as well. With the help of the malware, cyber criminals can gain access to most critical and important data. Login data to email and social network accounts, passwords to bank accounts comprise the targeted data. Thus, once cyber criminals acquire such information, the consequences might be too severe. Let us summarise the main activities of computer worms:

The prominent examples of worms

There is a wide diversity of computer worms. Though each of them slightly differs in their design peculiarities, the essence remains the same:

ILoveYou (alternatively known as Loveletter or LoveBug virus). This notorious cyber threat is one of the well-known samples of this category. It made its appearance in 2000 by infecting multiple computers worldwide. It tends to spread via email attachments. As you may have guessed already, the hackers named the attachment ‘love letter’ or ‘Iloveyou’ to attract victims’ attention. When they open the attachment, the virus extracts itself. Usually, the infection multiplies itself in a lightning speed as it compromises all attached devices and hacks all your email accounts. It means that within a moment all your email or social network contacts may receive the same message with the infected file. Thinking that it was you, who sent the email, the recipients open the attachment, and the cycle continues.

MyDoom (alternative names: Novarg, Shimgapi, and Mimail). The modus operandi of this virus with a menacing title does not differ much from LoveLetter worm. Besides spreading via email attachments, the threat may also infect users via file-sharing networks. Therefore, its distribution is much more accelerated. Unlike the previously presented worm, this infection may disguise as a fake delivery error message. Later on, the sequence of actions is the same. A victim reviews the attached document only to find out later the infection in his or her device. One of the most destructive peculiarities of this worm is that it creates a backdoor, a cyber system vulnerability. Furthermore, the hackers are able to access the infected device anytime. In addition, this worm is known to be the mediator for DDoS (distributed-denial-of-service) attacks. The fraudsters also have initiated a major attack on Microsoft companies while employing this cyber infection. The worm is associated with massive cyber assault in 2004. The scale of the threat was so enormous that one out ten spam messages contained the virus within.

The Iglamer gained the notorious fame after attacking the systems using their vulnerabilities. It does not assault devices via email attachments but instead targets the systems directly. After accessing the vital settings of the corrupted device, it may initiate the deliberate restart processes. Such activity significantly deteriorates the performance of the device and may grant the hackers remote access to your computer.

Facebook video virus. It was highly escalated in media worldwide. The virus was spotted a couple of months, but it sped up its activity quite lately as users in different countries reported receiving the link to the video containing their profile picture. Certainly, intrigued by the contents of such video message, victims clicked on the link. Less careful recipients might have enabled the installation of an additional Codec plug-in. Distinctive for worms, the virus automatically transfers the message to all your contacts after clicking on the hyperlink.

Is it possible to eliminate the threat?

Though worms differ in their operation peculiarities in comparison with other viruses, security experts still find the ways to terminate them. One of such options is to install an anti-spyware application. Update it and run the full system scan. Novirus offers ReimageIntego or Malwarebytes for the elimination of worms. These programs include virus signature databases which help them locate and eliminate the threat completely.

Latest worms added to the database 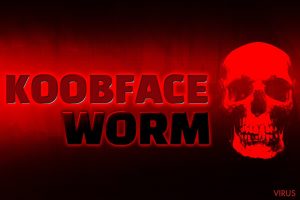