Keyloggers are specific computer applications or devices which record keyboard input information and send the collected data to some remote, predetermined server where it is later processed by the parties of interest. Both, hardware and software keyloggers can be either malicious or legitimate. Nevertheless, the true essence of the application really depends on how and for what purpose it is used. Since both types of keyloggers work by the same principle — they record keystrokes, save them to a specific file and transfer to third-parties without having to ask explicit computer user’s permission — this means that even the legitimate keylogging programs can be used for malicious purposes. But despite the lack of clearly defined demarcation lines between the legal and malignant applications, these two groups must be distinguished. Let us discuss them individually.

Keep in mind that physical keyloggers are not capable of making screenshots, and only collect the raw data that the computer user types on the keyboard. These small devices are placed between the keyboard port and the plug and save the information into its own memory. Thus antivirus or anti-spyware utilities cannot find them. However, just like software keyloggers, these devices can expose you to various privacy violations, including leakage of various login information, passwords, and similar data.

As we have already mentioned, keyloggers are designed to extract information about patterns of activities that are performed on a certain computer. In other words, these programs help unauthorized parties to spy on private users or company employees, this way, violating their privacy or stealing confidential information. It is important to note, though, that these programs do not spread like regular viruses. Instead, they have to be installed on the computer manually. For that, criminals may use brute force network attacks, remote administration tools (RAT) or other invasion techniques. As for the hardware keyloggers, these devices can be sneaked in only physically. Besides, they can be easily be found during a thorough hardware search. Thus, criminals are more concentrated on tracking software which is usually capable of all of the following features:

All of this information is usually stored and kept on the computer’s hard disk as an encrypted archive or file. This file continuously sends the gathered information to the predetermined servers bit by bit. Thus, regular system checkups are crucial for exposing such potential data leakage channels and closing them in time.

What are the most dangerous keyloggers today?

Keyloggers are not the most popular programs among the malicious software creators. This is probably due to the complicated distribution techniques and very specific application range. Nevertheless, there are numerous legitimate and fake applications that can be found online.

Keyloggers are not typical viruses because they do not travel like other cyber infections. Legitimate keyloggers are usually installed manually by the computer owner or computer network administrator. Also, hackers may brute force their way into your computer and place the malicious program on your computer led by malicious intentions. Such programs can be installed with the help of other viruses, like the already mentioned Trojans, exploit kits, etc. So far, keylogger attacks have been recorded mostly on Windows operating systems. Nevertheless, hints of these spying programs have been reported on the Mac OS X user camp as well. It is only a matter of time when this malware family will be adapted to all of the popular operating systems.

Sadly, after keylogger’s attack retrieval of the corrupt data is virtually impossible, since none of the information that these tools manage to collect stays on the computer. It is constantly transferred to the third-party servers which are private and inaccessible. Since network connection is the key aspect which allows data transfer, it is important to cut it immediately and start looking for the source of the problem. You can trust this task to the professional and reliable anti-spyware tools, for instance, programs like ReimageIntego or SpyHunter 5Combo Cleaner. Our team of experts has tested this software and their detailed descriptions can be found in the Programs section.

Latest keyloggers in the database 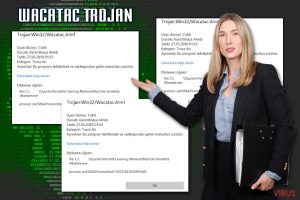 Wacatac is a malicious program that displays a warning about security issues or can be completely incorrect.
Trojans Viruses   May 13, 2022 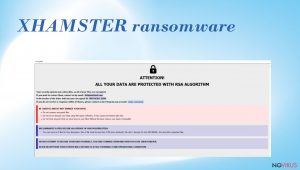 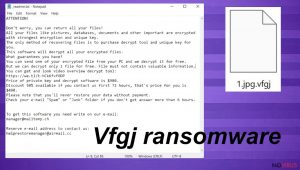 How to deal with Vfgj file virus