Win Speedup 2018 - is a fake optimization tool which bombards your computer with false warnings about "various threats found".

Win Speedup 2018 is a fake optimization tool which displays false error messages about various computer infections. When such program gets in your system, it starts acting as a fully legitimate and trustworthy virus removal tool because its main aim is to sell you its licensed version. After performing the full system scan, Win Speedup 2018 returns with various notifications reporting about “thousands” of infections. Additionally, it claims that the only way to clean them is to get its licensed version. However, buying the full version of this program is the same as throwing your money out. Once the developers of this program receive the payment, they stop bothering you with their fake alerts and notifications.

Fortunately, this fake optimizer is not as harmful as various malware forms. However, if you happen to decide to buy its license, its developers may get an access to your personal information, such as credit card details or similar data. However, the main aim its developers are seeking is to trick users into buying fake license of Win Speedup 2018 virus in order to gain income from them. If you have just been informed that your system is infected by numerous cyber threats, you should double check your system with the alternative scanner.

In addition, beware that such fake cleaning programs can come bundled with the regular software. In some cases, they are spread as optional components of different software which is trying to gain per-per-download income. If you happen to find such components in the app you are about to install, opt out of these offers. Otherwise, you will have to deal with further consequences – a need to remove Win Speedup 2018 from the system.

According to technology profs, this fake optimization tool belongs to a wide list of similar apps spread throughout the Internet. The app is very similar to such programs which are also categorized as PUPs:

All of these programs have a common purpose – to profit from naive victims. They work by the same operating principle. The only way to stop them from displaying their fake ads is Win Speedup 2018 removal. Otherwise, you will have to deal with various fake warnings showing up on your computer’s screen right after you start it. 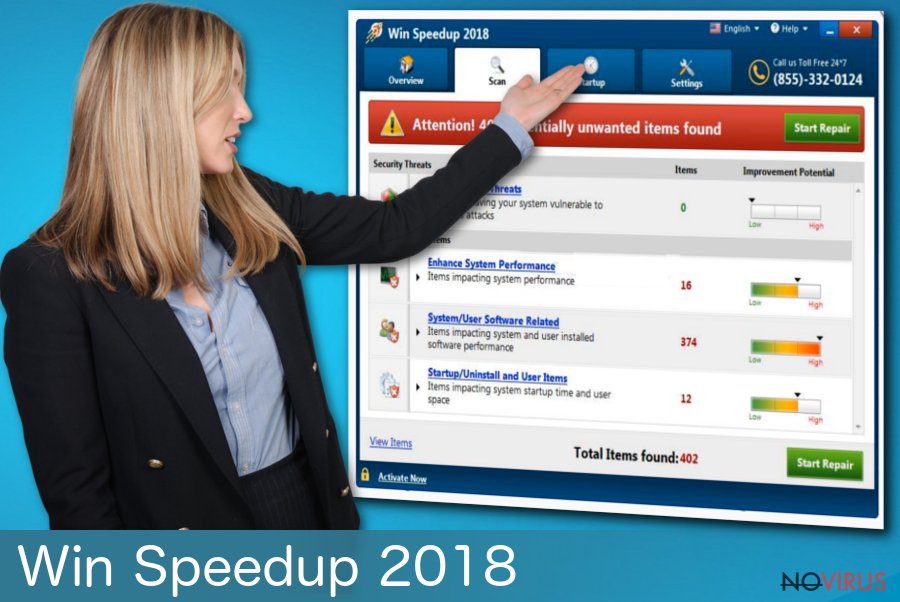 Win Speedup 2018 fake optimization program is profitable and useful only for its developers but does not bring real value for its users.

Fake optimization tools are promoted via official websites and bundling

PUPs, such as these false cleaning tools, often have their original download sites which present them as very useful and trustworthy programs. However, this is only just a trick to attract people and trick them into downloading unlicensed version. If you encounter such site – do not consider downloading the fake program or purchasing its license as it will not bring any good to you and your machine.

Moreover, fake optimization programs distribute themselves through regular software. Such programs come together within original programs without any notice. To prevent their infiltration, we highly recommend using only original download sources which have been approved by security experts.

To prevent various PUPs’ infiltration, we recommend installing an antivirus program. It will detect any threats possible and announce if your computer is infected by any. In addition, avoid visiting various illegitimate sites as pornography as they might include various questionable components. Finally, always opt for Custom or Advanced installation mode to get a chance to prevent optional downloads without your notice.

To remove Win Speedup 2018 virus and vanish all fake warnings from your desktop, you should consider downloading and installing a trusted anti-malware tool. It will display quick elimination instructions and help you get rid of the fake optimization program just with a few clicks.

If you are willing to uninstall this app manually, follow the instructions that are displayed below to perform manual Win Speedup 2018 removal correctly. After the process is finished, refresh your machine by using System Restore and reset browsers to make sure that they are not infected with sponsored add-ons.

You may remove virus damage with a help of ReimageIntego. SpyHunter 5Combo Cleaner and Malwarebytes are recommended to detect potentially unwanted programs and viruses with all their files and registry entries that are related to them.

Get rid of Win Speedup 2018 from your Windows OS by following this guidance:

Remove all PUP-added components from IE:

After completing these steps, Microsoft Edge should be Win Speedup 2018-free.

Eliminate all content that was added by Win Speedup 2018 to clean Firefox:

You can quickly scan the QR code with your mobile device and have Win Speedup 2018 manual removal instructions right in your pocket.

Vote in our poll
What method did you use to remove Win Speedup 2018?
2.11 % phoned computer support specialists
9.89 % downloaded a security program
17.89 % removed it using free removal instructions
69.22 % used an automatic removal tool and removal instructions
0.89 % contacted support via email
0 % got answer via Ask Us service
Your vote has been submitted!
Vote »
Cannot remove Win Speedup 2018?
See the results »