Intego is a multi-functional security suite that is developed and continually improved by the most experienced researchers in the field of Mac malware. The company providers different security solutions: Mac Internet Security X9, or Mac Premium Bundle X9, each of which ranges in the level of protection provided to macOS. Despite that, all security applications provided by Intego are capable of stopping and removing a variety of computer threats, including spyware, adware, trojans, ransomware, scareware, crypto-miners, and other malware, as well as online phishing, that is prevalent in the current security landscape.

Besides regular malware removal and detection features, Intego for Mac incorporates a variety of other features that provides comprehensive protection for each of the computers that it is installed on. For example, it employs an easy-to-setup and use Firewall, as well as anti-phishing, anti-spam, data protection, and other features. With a Premium Bundle, users can get a lot of extras, such as ContentBarrier XP, Personal Backup, Mac Washing Machine X9, parental control option, and much more. In essence, Intego can provide not only security but also the much-needed optimisation options for those who don't want to perform the tedious junk/cache file cleaning duties on a regular basis manually.

Overall, Intego is a lightweight, silent, yet effective security solution that will show up in your view when you need it the most, all while working in the background, checking for malware. In this Intego review, we will try to explain why protecting your Mac with the most advanced and comprehensive security software is so important, and why Intego Mac Internet Security is the best choice of doing just that.

Intego researchers: over 20 years of expertise

Initially, power users and even security researchers were sure that Mac malware simply does not exist, as mac uses sandboxing principle when new apps are being installed, essentially releasing the code into a contained environment. Additionally, Macs also employ the built-in XProtect (a signature-based security measure), as well as the Gatekeeper (Apple's anti-malware solution) to ensure that no nasties access this seemingly secure environment. 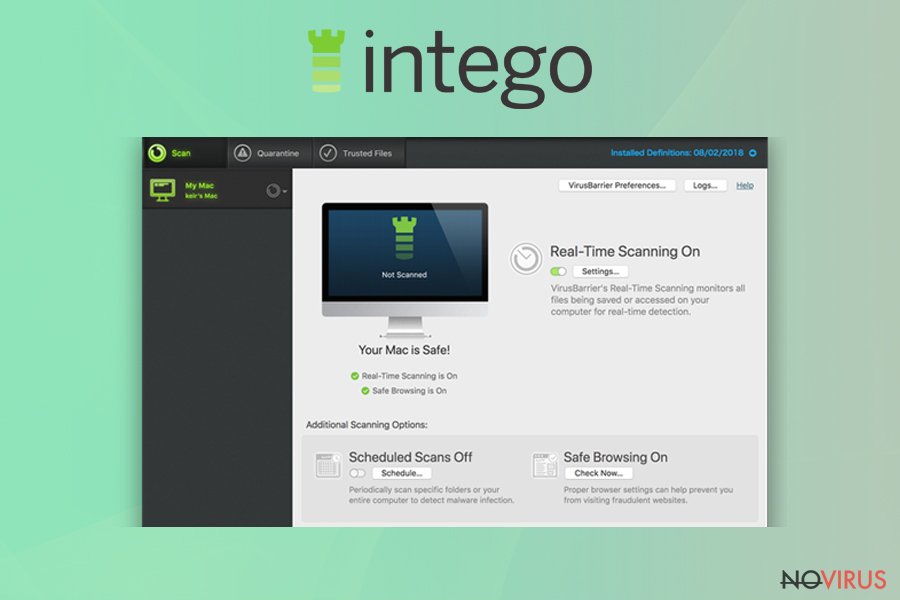 Due to this and the fact that most users preferred Windows systems over Macs, cybercriminals spent a long time concentrating on the former OS. They did not bother with Mac malware for a while, although modern-day infections can be traced to around mid-2006 with threats like Leap and RSPlug. However, the situation changed quite a bit since then, as more users started employing Macs as their computers of choice, and cybercriminals created new techniques to penetrate these seemingly secure machines. Currently, Mac malware, especially adware, is one of the main problems that users face. This is one of the main reasons why you should employ tools like Intego antivirus – the company has deep roots in the field.

As a company, Intego was established as early as 1997, back when Mac malware was considered to be a myth – and, in some cases, continues to be so to this day. Company CEO Laurent Marteau was determined to change the perception that security solutions for Macs are not needed and only focused on most innovative technologies for malware analysis and detection.

Today, Intego is one of the leading companies in the cybersecurity field, with multiple security research publications, new malware strain discoveries and frequent Security Blog updates, security software by which is trusted by more than two million users worldwide. If you are looking for experienced crew to protect your Mac – Intego software is the one to choose.

Also, there are numerous different options for purchasing Intego software for multiple Macs – 1, 3 or 5 different machines, with prices fluctuating accordingly. Of course, purchasing the app for 5 Macs for two years gives the most value for money, although most regular users would only need protection for one machine.

If you simply want to try out the security tool before buying it, you can start a 30-day Intego trial easily, although it does not provide full functionality of the app (such as malware damage elimination), which is only available after the software is purchased. After a licence is acquired, users are also entitled to free technical support via phone, email or web form, as well as a 30-day trial, although the policy is relatively strict for the latter. 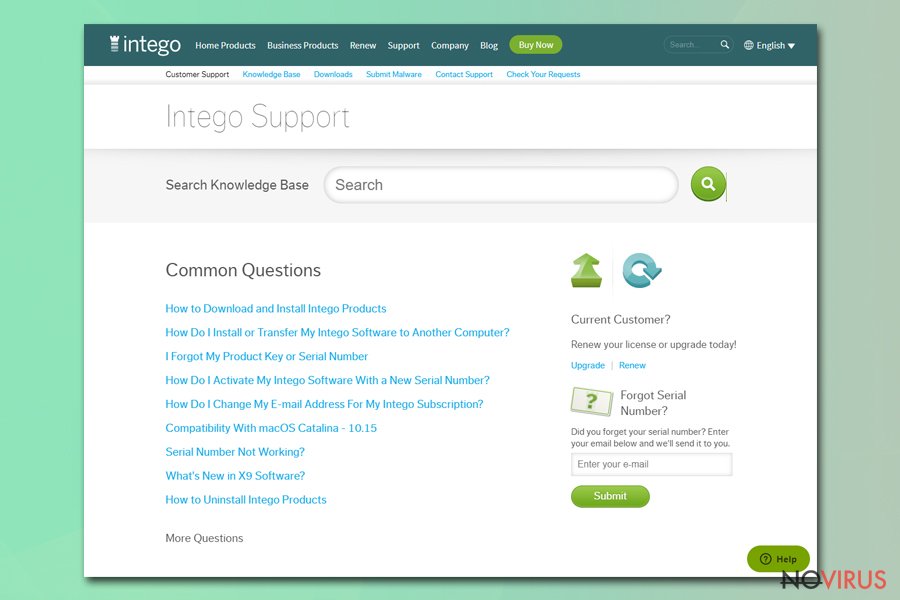 Once you start the installation process, simply follow the on-screen instructions – it should take just a few minutes. After that, you will be presented with three different protection modes you will have to  choose from:

Which one to pick entirely depends on your personal preference, IT knowledge and the level of risks you are taking on during your daily web browsing sessions. Those who rarely interact with high-risk websites and only use their Macs to watch a movie of check Facebook – Minimum level would be enough, although Standard is recommended as a default.

Once the installation is complete, you will be presented with overlay messages that will explain basic functions of Intego antivirus – you can disable these easily with a single mouse click, however. 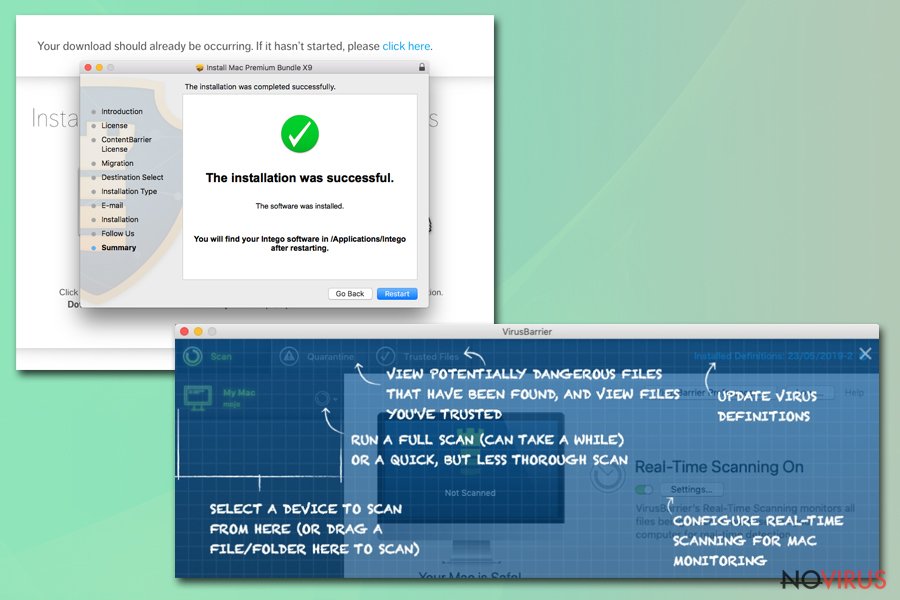 Rogue anti-malware tools for Macs: get rid of them with Intego antivirus

Anti-malware solutions are not the same – they are developed by different teams that have different goals in mind. While some security apps might differ in malware detection efficiency, removal rate, extra features, speed, and other perks, some “security” tools are developed and released to scam users and act more like malware themselves.

These fake all-in-one tools had been around for a very long time, as many users download them via fake Flash Player updates or are shown a fake virus infection warning on a phishing site. Once one of such apps performs a “scan”, it detects a variety of false-positives or harmless files and marks them as harmful. To fix these fake issues, users are suggested to purchase a full version of the application, essentially wasting their money, potentially disclosing financial information to cybercriminals, and infecting their Macs with malware.

Suchlike software is called scareware or scamware, often propagated via deceptive channels and employing various techniques to make users spend money – best examples of such apps are the following:

These apps clutter Macs and mislead users, wasting their time and money, all while creating huge difficulties during elimination process – they often lack the uninstallation file and leave malicious files behind, which allows them to be reinstalled repeatedly.

This is just one of many examples what Intego for Mac could get rid of – it uses comprehensive database and behavioural detection technique to eliminate the annoying potentially unwanted applications, as well as malware such as OSX/Shlayer or CrescentCore, both of which specialise in background installation of scareware apps. 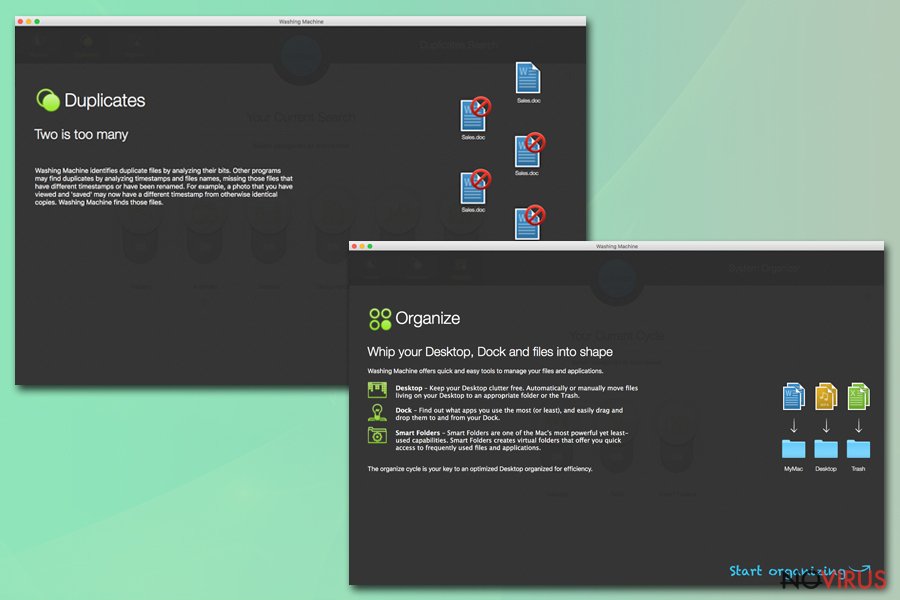 Intego antivirus: what to expect?

Each of the Intego for Mac apps consists of two components that work together in harmony: VirusBarrier X9 and NetBarrier X9. Both of these elements work together to provide comprehensive protection for users, including drive-by downloads, phishing emails, malicious social media links, and infectious USB flash drives. In other words, malware can come from many different sources, and Intego can stop all types of attacks against your Mac. As soon as Intego Mac Internet Security detects a threat, it quarantines it and places it in a secure environment, called quarantine, all the contents of which are regularly eliminated.

NetBarrier X9 is a firewall – it can easily prevent network intrusions, effectively stopping malware attacks that would allow threat actors to perform secret monitoring activities. While this feature has plenty of configuration options that even the pickiest users would find useful, default settings provide more than enough protection when it comes to network security.

If you are asking how well Intego can protect you from different types of malware – we suggest you check independent security software test labs' results for yourself. The leading independent bodies, AV-Test and AV-Comparatives test software against thousands of malware samples regularly and provides results that serve as good indicators for protection, performance, and usability. Intego VirusBarrier X9 scored the perfect 100% in malware detection in the last performed test in June 2019 and only showed one false-positive result out of 463152 samples used for the test. 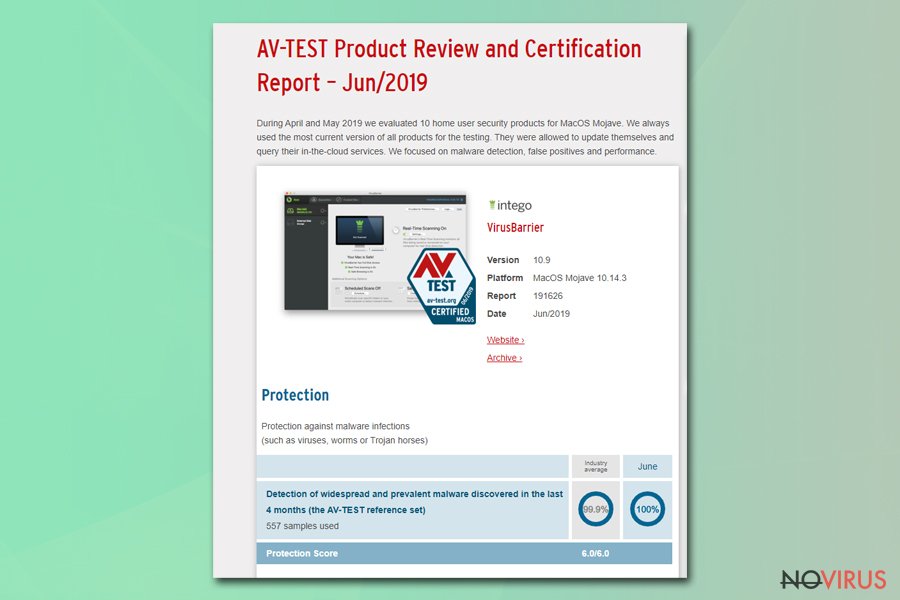 To conclude our Intego review, we would like to outline how important the protection of any device which is connected to the internet is. Mac malware has been on the rise for a very long time now, and, at the start of 2020, was even outpacing Windows-related malware when it comes to the volume, as researchers found.

Intego antivirus is one of the leading anti-malware solutions for the comprehensive security of your Mac. It just has everything that is needed: speed, high malware detection rates, non-intrusive, and simply effective. It will be able to protect you from all types of malware, phishing attacks, and even the annoying, potentially unwanted applications that proved to be a huge problem for macOS users. 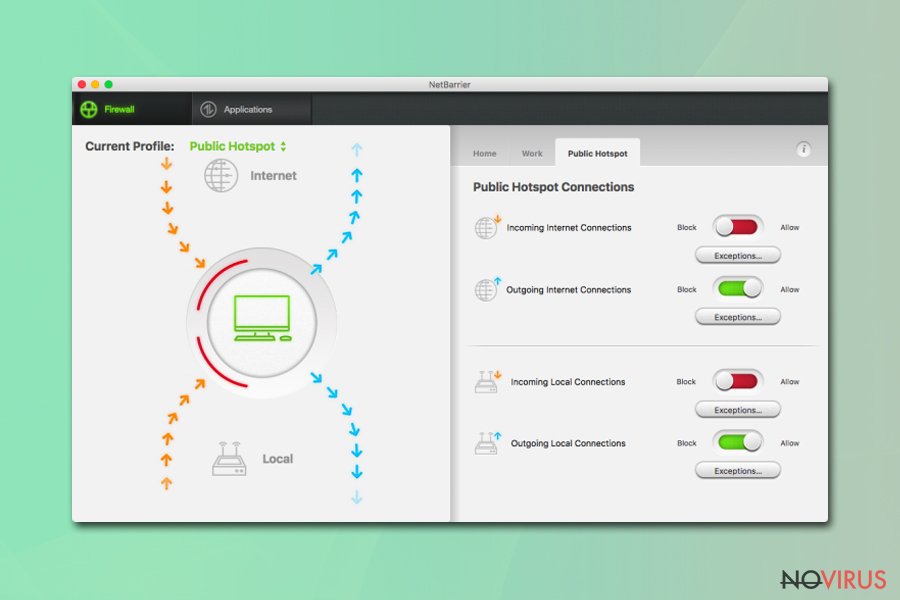 If you yearn for even more protection, as well as additional features for optimisation and cleaning, you can also opt for the Intego's Mac Premium Bundle, that will include an advanced Firewall, Washing Machine, Personal Backup, and much more.

Offer
try it now!
Download
Intego Happiness
Guarantee Download
Intego Happiness
Guarantee
Compatible with OS X What to do if failed?
If you failed to remove virus damage using Intego, submit a question to our support team and provide as much details as possible.
Intego is a highly recommended anti-spyware program to scan your computer system for threats and insecure software. The trial version of is capable of detecting and deleting malicious programs from your computer. Intego scans the entire computer system and checks whether it is infected with spyware/malware or not. If you want to remove computer threats and secure your computer system, you should consider buying the licensed version of Intego.
Intego review Intego review

Your opinion about Intego Cancel reply