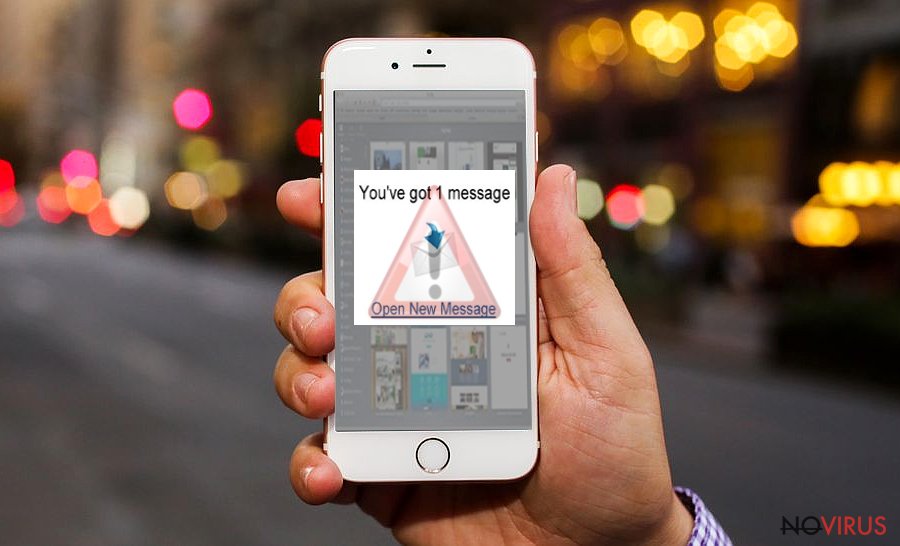 iPhone virus is a malicious program which is designed explicitly for iOS users. It can appear in the form of a pop-up, fake security alarm or hide its presence on the compromised smartphone. According to experts, the malware can even be unconsciously distributed by known application developers in the App Store.

There are several techniques to get rid off all its variants. You can check the detailed guidelines provided below.

The most prevalent iPhone virus variant bothers users via Safari browser. Typically, it opens deceptive pop-ups and informs about malware/spyware detected on the device. Other rogue viruses display deceptive “Congratulations, You are today's lucky visitor!” messages, asking the victim to claim the “prize” within seconds.

These false virus alarm messages are just a marketing trick to lure users into downloading potentially malicious programs and generate revenue for their developers. Such viruses try to convey a sense of urgency and force the victim to follow deceptive commands that can eventually lead to data loss or a severe phone infection. You should never let it deceive you.

It is highly recommended to stay away from “iPhone virus warning” pop-ups. If you accidentally encountered one of them, close the page displaying it. The next step is to check your device for suspicious programs or corrupted settings that cause Safari to display the described pop-ups.

If you have never encountered a similar problem before and now you do not know how to remove iPhone virus, we suggest using instructions provided right below the description of this iOS threat.

One of the most significant proofs that iPhones have their vulnerabilities and can be circumvented — CIA spyware. It was initially designed to transmit audio/text messages, geolocation, together to activate user's camera and microphone remotely.

The hacking tools used were developed by the Central Intelligence Agency (CIA) or purchased from the underground shops such as Baitshop. Moreover, the press release states that NSA and FBI supplied their arsenal to produce CIA malware as well.

Also, another variant of iPhone virus is Pegasus spyware. Researchers believe that NSO group company developed the malware, which takes advantage of ‘zero-day’ iOS vulnerabilities that are also known as ‘Trident’ and performed an attack to break through Apple’s security system. Additionally, the malicious program can stealthily destruct itself, if there is a risk to be exposed.

Similarly, as the CIA spyware, Pegasus operates to secretly transmit texts, audio and video calls, e-mails and all data on the device to the developers. It targets people working in the political sphere as well as CEOs that can provide valuable information.

Therefore, if you want to take care of your privacy, we strongly recommend you to start an iPhone virus removal process. Use the guide provided below and also scan your OS devices using ReimageIntego or any other reliable security software.

The most annoying versions of iPhone virus

Free iPhone X scam. It is a new variant of iPhone virus developed to swindle money from inexperienced Apple fans. Scammers share the fake Facebook or Instagram pages offering to complete surveys. Once the user fills out the deceptive poll, s/he is redirected to a website asking to provide personal information in order to send the “prize.” Typically, these scam giveaways collect personal details and sell it in the underground market.

Additionally, the fake pages and accounts on social media can invite naive people to click on fraudulent links that might lead to malicious web pages. It goes without saying that visiting these sites increases the chances of infecting the computer unknowingly.

Finally, fake pages can be used to collect likes or followers. As a result, a fraudulent page with thousands of followers can be sold on the dark web forums and used for illegal projects.

“YOUR APPLE DEVICE HAS A VIRUS” virus. The malicious program appears in the form of a pop-up notification. This fake alert claims that your device is infected with the above mentioned Pegasus spyware and states that you need to contact “Apple Care” via +1 8333 370 777.

At this point, we want to assure you that your system is not corrupted. It is just a way scammers tend to lure people into giving remote access to their computer or purchasing useless and expensive security software to remove a non-existing malware.

“Apple Security Alert” virus. This variant of iPhone virus is a pure tech support scam virus which also tries to attack its victims by loading malicious websites via Safari. The user encounters a genuine looking fake security alarm that informs about the Trojan found on his/her gadget.

Later, the pop-up offers to start the “cleaning” process by pressing the “OK” button. Be aware that there is no reliable information about the “infections” found by these false pop-ups.

Your iPhone is not corrupted, and you shouldn’t let scammers deceive you into downloading possibly malicious apps or other high-risk computer infections. 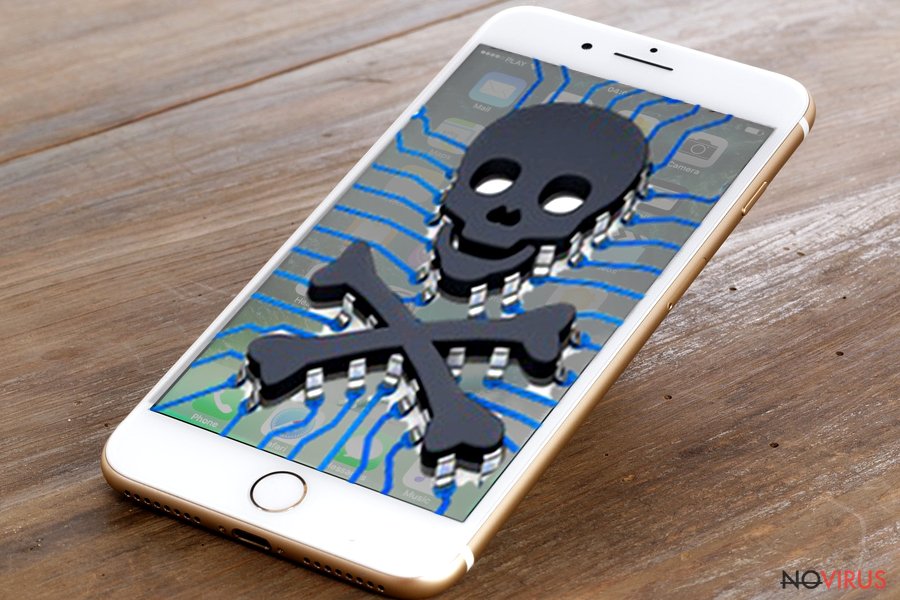 iPhone virus is extremely dangerous and can pose a serious threat to user's privacy.

Malware is distributed by taking advantage of authorized app developers

According to the analysts, cybercriminals created a new way to infect the system of Apple devices — they infiltrated XCodeGhost malware to the Xcode programs used by verified app developers. Thus, multiple regular applications were stealthily exploited to distribute malware on App Store. Once, Apple support was informed, several hundreds of software were eliminated.

However, shortly after, criminals copied third-party development framework (also known as Unity) and modified it similarly as Xcode programs. This new variant was called UnityGhost and distributed using the same method as its precursor. You should always be aware of the possible threats and carefully download apps to your phone.

There is no surprise why so many Apple smartphone users are interested “can iPhones get viruses from websites.” The answer is yes, in fact, they can. You can run into virus alerts while exploring shady Internet websites. We recommend avoiding ads promoted by suspicious websites since they may trigger redirects to phishing domains.

These usually display fake alarms designed to swindle money from you. Typically, they ask to contact “tech support” which will tell you to purchase useless apps. Other pop-ups might lead you to pages asking to provide sensitive information – make sure you close them immediately!

Get rid of different variants of iPhone virus

To start a process of a pop-up type iPhone virus removal, you should double-click the ‘Home’ button and close the Safari app by swiping it up. Later, follow the steps:

Also, if you have noticed that the data on your device might be accessed by malevolent people or any other unusual behaviour of your mobile, remove iPhone virus using the steps below:

You may remove virus damage with a help of ReimageIntego. SpyHunter 5Combo Cleaner and Malwarebytes are recommended to detect potentially unwanted programs and viruses with all their files and registry entries that are related to them.

Follow the same steps as explained above with all other shortcuts of Internet browsers, including Google Chrome and Internet Explorer. Please check Start Menu, Desktop, and taskbar to find all shortcuts.

After completing these steps, Microsoft Edge should be iPhone-free.

Prevent the government from spying on you

As there is a growing debate in government about collecting users' data and spying on citizens, you should take a closer look at this issue and find out what shady ways of gathering information can be used to collect information about you. You need to browse anonymously if you want to avoid any government-initiated spying and tracking of information.

You can enjoy secure internet browsing and minimize the risk of intrusion into your system if you use Private Internet Access VPN program. This VPN application creates a virtual private network and provides access to the required data without any content restrictions.

Control government and other third party access to your data and ensure safe web browsing. Even if you do not engage in illegal activities and trust your ISP, we recommend being careful about your security. You should take extra precautions and start using a VPN program.

You can quickly scan the QR code with your mobile device and have iPhone virus manual removal instructions right in your pocket.

Vote in our poll
What method did you use to remove iPhone virus?
62.5 % phoned computer support specialists
7.98 % downloaded a security program
9.74 % removed it using free removal instructions
19.4 % used an automatic removal tool and removal instructions
0 % contacted support via email
0.38 % got answer via Ask Us service
Your vote has been submitted!
Vote »
Cannot remove iPhone virus?
See the results »