It hasn’t taken long for Cerber v4.0 virus to join the dark side of the web. Indeed, the creators of the virus are dedicated to their dirty job. Since the first version of the Cerber virus has been released, they created several versions of it soon. At the beginning of August cyber world was threatened by Cerber 2.0 and one month later, in early September, Cerber 3.0 came out in the daylight. Virus researchers spotted the newest version of the ransomware at the beginning of October. The virus belongs to RaaS (ransomware-as-a-service) category and authors have been selling it on the dark market. This distribution and monetization strategy was developed in early 2015, and now it becomes more and more popular in hackers’ world. The creators of the ransomware benefit in two ways: for selling the virus and generating revenue collected by ransomware distributors. According to the developers, the newest ransomware is more powerful and stronger than its predecessors. One of the major unique features is that malware has a better defence system against antivirus programs. Indeed, Cerber v4.0 removal might be more complicated and difficult. However, if you encounter it, you should still try your best to get rid of it immediately. We still recommend using Reimage Reimage Cleaner Intego and at the end of the article we provided detailed instructions how to access the program and remove Cerber v4.0 completely.

Ransomware also spreads via malicious email campaigns and malvertising. However, once it gets inside it causes more damage than before. Cerber v4.0 ransomware is capable of encrypting even more different types of files and appends random file extensions to all encrypted files. Meanwhile, previous versions of the ransomware put .CERBER3 file extension. So, data decryption became more complicated. However, we still do not recommend paying the ransom, even if it seems like the only option. The hackers prepared a brand new ransom note which is delivered in HTA format instead of usual TXT file format. Talking about the content, it stays more or less the same. Victims have to pay the ransom using Bitcoins via Tor browser. Another new feature of the Cerber v4.0 malware is that it can shut down the database processes and steal the information from them. 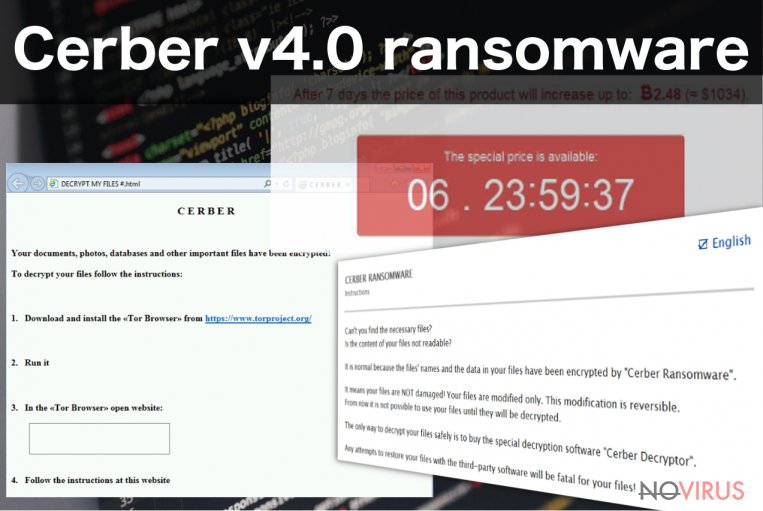 Even though Cerber v4.0 virus is a new player on the dark web, it is already known that three different malvertising campaigns help to spread it.

These malicious files are spreading via malicious spam emails and malvertising. The exploit kit is delivered with macro-enabled documents and once victim opens it and activates macros, the Cerber ransomware v4.0 virus gets inside and starts corrupting the files located on the computer. We want to remind one more time to be careful with emails and do not open or download attached files from unknown senders. Always double check the information and make sure that you can trust the sender. The second method for ransomware distribution is malicious advertisements. Usually, these ads are placed on suspicious and compromised websites such as gaming, gambling, and adult-related Internet sites. It’s better to avoid them than deal with complicated Cerber v4.0 removal later.

Virus researchers have noticed an increasing number of the ransomware attacks. Hackers become better every single day in tricking people into opening suspicious email attachments and cause damage for thousands of computers daily. Unfortunately, there are no file decryption tools created yet that can help to decrypt corrupted files. As we already mentioned, the virus uses even more complicated encoding algorithm. We recommend taking precautions before you encounter ransomware attack. Make backup copies of your files and store them in the external devices. Then you can be sure that at least the majority of your files are safe after the ransomware attack. Having backups helps to calm down a little and concentrate on virus elimination.

Cerber v4.0 ransomware is a strong and dangerous virus. Its removal might be more difficult compared with previous versions of Cerber. As we already mentioned, this malware can bypass antivirus programs. There are high chances that it is capable of blocking access to security programs or they might not detect it. At the end of the article, we provided a step-by-step guide how to remove Cerber v4.0 from the system. Please, follow them carefully and attentively. Moreover, you will still need malware removal tools for virus elimination. We strongly recommend using one of these programs Reimage Reimage Cleaner Intego, SpyHunter 5Combo Cleaner or Malwarebytes. After the last step of virus elimination, do not forget to scan the computer with antivirus program one more time – just to be sure that this dangerous computer infection has been eliminated completely.

After Cerber v4.0 removal, you can try to recover at least few corrupted files. We explained several methods that might be useful bellow. However, we cannot assure that they will be successful. But we encourage you to try them – maybe they will be effective, and you will be able to recover the most important data.

Using the tutorial provided above you should be able to eliminate Cerber v4.0 from the infected device. novirus.uk team has also prepared an in-depth data recovery guide which you will also find above.

Unfortunately, it is still impossible to recover files encrypted by Cerber v4.0 virus. We do not believe that paying the ransom is an option, so you should not sponsor the criminals for several reasons. You may not get a necessary decryption key or it may deliver more malicious files to your PC. We have explained three methods that might help to restore at least some of your lost data without using Cerber Decrypted offered by the hackers.

There are a couple of methods you can apply to recover data encrypted by Cerber v4.0:

Data Recovery Pro is not created for restoring files encrypted by Cerber v4.0 specifically. However, there is a possibility that this tool might recover at least some of your files. Before using this tool, you have to eliminate the virus from the system.

Ransomware might have deleted Volume Shadow Copies from your PC. If it failed in doing it, you can benefit from ShadowExplorer by following these steps:

It is strongly recommended to take precautions and secure your computer from malware attacks. To protect your PC from Cerber v4.0 and other dangerous viruses, you should install and keep a powerful malware removal tool, for instance, Reimage Reimage Cleaner Intego, SpyHunter 5Combo Cleaner or Malwarebytes.

You can quickly scan the QR code with your mobile device and have Cerber v4.0 ransomware virus manual removal instructions right in your pocket.

Vote in our poll
What method did you use to remove Cerber v4.0 virus?
3.18 % phoned computer support specialists
11.31 % downloaded a security program
58.88 % removed it using free removal instructions
26.47 % used an automatic removal tool and removal instructions
0 % contacted support via email
0.17 % got answer via Ask Us service
Your vote has been submitted!
Vote »
Cannot remove Cerber v4.0 virus?
See the results »