WannaCry virus operates as a file-encrypting threat crafted on the basis of EternalBlue vulnerability. Due to this flaw, outdated Windows OS devices are vulnerable to the attack. Since its global launch on May 12th, the assault encompassed the entire virtual community, affecting more than 150 countries.

The malware, which is also labelled as WannaCrypt0r, WannaCryptor, WCry, and Wana Decrypt0r, has assaulted multiple governmental institutions throughout the world. Among the affected institutions were National Health Service in the UK, Interior Ministry in Russia, private institutions in Spain, Japanese 'Hitachi' company.

The success of the malware lies in the worm features of the malware which grants it the ability to infect other devices visible on the same network. Once the malware enters a device, it encodes data and marks it with .wcry, .wncrypt or .wncry file extensions. Besides launching its own program entitled as Wana Decrypt0r, the malware aplaces Please Read Me!.txt file with the instructions. At the moment, the ransom demands £232.

Victims are encouraged to remit the payment within 7 day unless they do not care about the elimination of their files. Furthermore, the malware deletes shadow volume copies which leaves fewer alternative data recovery options. At the moment there is no information what kind of encryption method was used. L

uckily, after several days of its rampage, a Twitter user under the name MalwareTech succeeded in finding a way to terminate the malware. However, at the moment, there is already subsequent versions roaming on the net, e.g – Wana Decrypt0r 2.0. On the other hand, IT experts assure that these variations are not as sophisticated as expected. They seem to be patched manually by other cyber villains but not by the original developers.

Recent news reveals that the malware might have connections to the notorious Lazarus group. Thus far, the malware only succeeded in earning £38660 in comparison with the entire scale of the virus. If this misfortune has befallen your computer as well, the first thing you should so is to remove WannaCry. For that purpose, ReimageIntego or Malwarebytes might be effective. 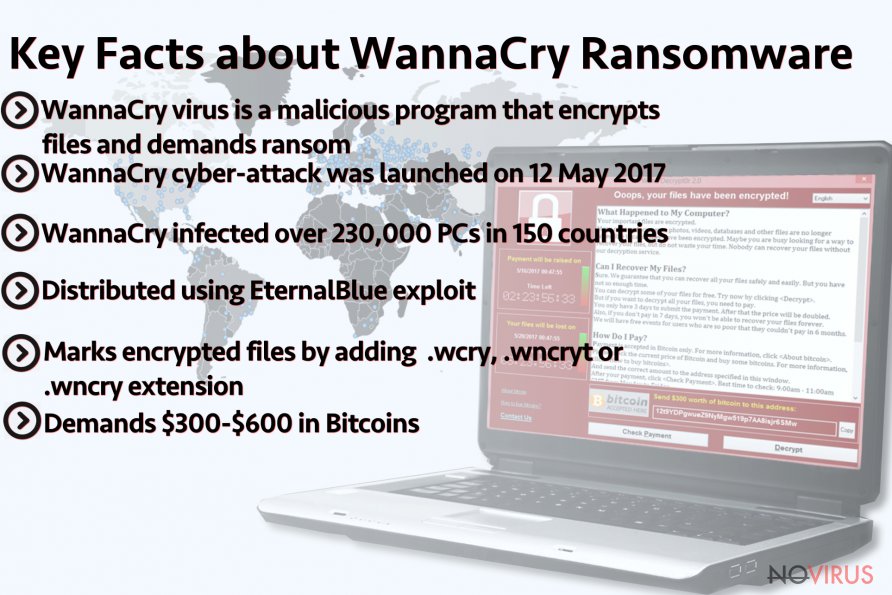 The very attack was launched on May 12th, 2017. The news about the malware broke out after National Health Service located in the Great Britain reported WannaCry ransomware to have paralysed their systems. Later on, FedEx, transportation agency, German train service “Deutsche Bahn“ and multiple others reported the attack. The initial report claimed that over 230 000 countries have fallen under the assault of this malware, though further investigations clarified that 99 countries suffered the attack.

The virus successfully spread in all parts of the world: less popular targets such as Latin American countries or Central Asia states were struck as well. Regarding such enormous number of the malware, IT experts have no information whether the racketeers returned data. Luckily, most of the companies had backup copies which, limited the scale of inflicted damage. Therefore, it reminds the virtual community to stay vigilant and backup their important documents.

The cause of this malware attack is no less interesting than the very virus. EternalBlue, or SMBv1, specifically, CVE-2017-0145, is the core element which let the cyber criminals to wreak havoc on a global scale. Due to it, a perpetrator gains access to a computer. The world would have never known about this vulnerability if not the data leak occurred on March 2017.

Interestingly, that the data was stolen by Shadow Brokers from the US National Security Agency. It also sparked theories that the NSA developed this exploit for possible cyber attacks on outdated Windows 7 and Windows 8 systems. When the data leak became evident, Microsoft urgently issued MS17-010 patch. Though the patch was said to have eliminated the flaw, current situation reveals a high number of outdated systems throughout the world. Thus, it is necessary to arm up with the knowledge to prevent the cyber assault:

.wcry file extension virus. It is regarded as the initial version of this cyber menace. Interestingly, that it entered the cyber space already on February this year. Nonetheless, it was not developed into an enormous threat. With the assistance of AES-128 encryption technique, the malware encodes users files. In exchange for the data, 0.1 Bitcoin was required. At that time, the threat was transmitted via corrupted spam email attachments. However, this attack did not make a huge profit for the hackers. Thus, cyber criminal lost interest in improving it.

WanaCrypt0r ransomware virus. It did not take long for the hackers to come up with new ideas, as they made use of the NSA exploit tool data leak. Contrary to the previous version, the malware uses a much more efficient method of infiltration. In the previous case, users may prevent the attack simply by ignoring spam emails, but in this case, every user who delayed updating his or her system is subject to the attack. Once the malware invades the system, it encodes personal files and appends .wncry, .wncryt, or .wcry file extension.

Unfortunately, there is no decryption tool released yet. Thus, the only viable way to recover files is to use backup copies or alternative data decryption tools. This version also contains its GUI interface with elapsing time. Victims are urged to pay the ransom which usually amounts £238 within 7 days. Payment delay after 3 days results in doubling the price. There is already WannaCrypt0r 2.0 version released.

Wana Decrypt0r ransomware. It is an analogous version of the previous alternations. The perpetrators were quick to launch WanaDecrypt0r 2.0 as well. It also contains a clock counting time until final data elimination to expert pressure on the victims. £238 ransom payments are usually required. IT experts note that there are no reports of retrieved data. Thus, it might be futile to pay the ransom. This version was seized by the earlier-mentioned IT expert ‘MalwareTech.’

Though the malware has been terminated, there is no decryption tool released yet. Specialists note that the ransomware contained ‘kill switch’ which granted a chance to terminate the attack. Though cyber security specialists expect more elaborate versions to surface, latest editions reveal that they lack sophistication. In any case, when encountering one of the versions of this crypto-malware, WannaCry removal should become a priority. 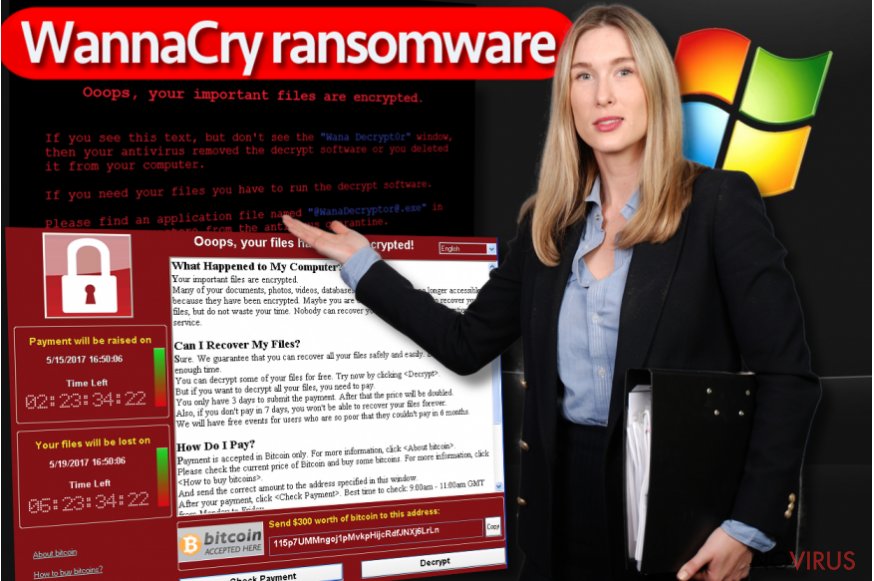 When it comes to ransomware, manual elimination is never a recommended option. Therefore, it would be better to remove WannaCry virus with the assistance of the malware elimination utility. The key fact is whether the program is updated.

On May 12th few anti-virus programs were able to detect the infect, but now the majority of them detect this ransomware-trojan. It is not surprising if you cannot launch the software.

Ransomware threats tend to disable anti-virus programs. In that case, take a look at below instructions to recover access. After that, you will be able to complete WannaCry removal. Note that data decryption is only effective when the virus is completely eradicated.

In case you do not succeed in eliminating WannaCry from the first attempt, restart the device in Safe Mode which restores access to key system functions. Then, you will be able to launch malware elimination software.

System Restore method should serve as an alternative version for you to recover access.

Using the tutorial provided above you should be able to eliminate WannaCry from the infected device. novirus.uk team has also prepared an in-depth data recovery guide which you will also find above.

There are a couple of methods you can apply to recover data encrypted by WannaCry:

In case you do not have backup copies or can't come up with an alternative method to restore the files, this program may help you to retrieve some of the files.

There is no official WannaCry decryption tool released yet

It is strongly recommended to take precautions and secure your computer from malware attacks. To protect your PC from WannaCry and other dangerous viruses, you should install and keep a powerful malware removal tool, for instance, ReimageIntego, SpyHunter 5Combo Cleaner or Malwarebytes.

You can quickly scan the QR code with your mobile device and have WannaCry ransomware virus manual removal instructions right in your pocket.

Vote in our poll
What method did you use to remove WannaCry virus?
0.92 % phoned computer support specialists
7.93 % downloaded a security program
20.04 % removed it using free removal instructions
70.68 % used an automatic removal tool and removal instructions
0.42 % contacted support via email
0 % got answer via Ask Us service
Your vote has been submitted!
Vote »
Cannot remove WannaCry virus?
See the results »