What you must know about TeslaCrypt 3.0 virus

Prepare for the bad news – TeslaCrypt 3.0 virus has been released. This malware is deemed as ransomware. In case you do not know how it works, then we are here to disclose the essential facts about the virus. The ransomware is programmed to encrypt personal information. Later on, you are obliged to pay a large sum of money supposedly for the exchange of the data. This virus has managed to wheedle out astonishing amounts of pounds. Nevertheless, few or no information about the data retrieval is known. In case you happen to be one of the victims, rest assured as we will tell you how to remove TeslaCrypt 3.0 virus. In order to do that you will need to install an anti-spyware program, for example, Reimage Reimage Cleaner Intego.

As you have already realised, TeslaCrypt 3.0 ransomware is a an update to previous versions. Originally, when TeslaCrypt appeared, cyber security experts have relatively quickly found main flaws and were able to come up with decryption methods escaping the option of paying the money. However, with the current edition it is not so easy. Hackers have perfectened the virus. Now it uses an elaborate ECDH algorithm. The hackers also employ a SHA-256 hash as a symmetric encryption key. Thus, it complicates matters much more. 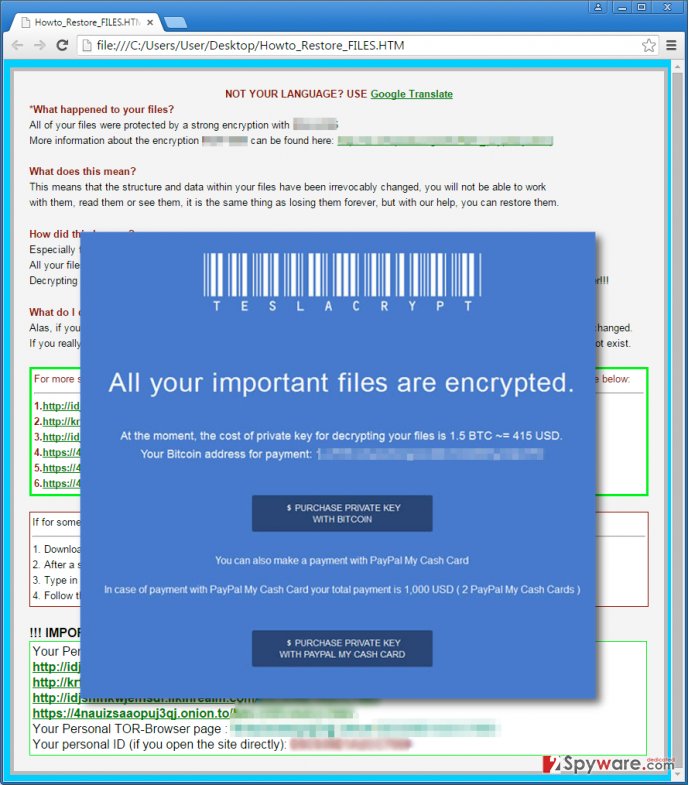 How does the virus invade computers?

TeslaCrypt 3.0 malware slithers into an operating system via an email attachment. IT specialists have noticed that, usually, the attachment comes as a ZIP archive entitled as a lottery winning notification, a CV, or a fake invoice. Deceived that the email is legitimate, you carelessly open the attachment, the ZIP file gets extracted and TeslaCrypt 3.0 sets foot on your computer. After it starts the encryption process, you might not notice any odd signs that an aggressive virus operates behind your back. The ransomware adds an extension to your precious documents, excell files, photos, such as .micro, .ttt or .xxx. Afterward, the virus envelops a note called Howto_Restore_FILES.TXT on your screen informing of the encrypted documents. We recommend deleting this file. Though it will not eliminate the virus itself, but it will be a first step towards TeslaCrypt 3.0 removal.

Additionally, you ought to be aware that this ransomware might employ a trojan or similar malware as a transmission tool. A trojan can take a different form: it can either present itself as an script or an exploit kit. Therefore, usually it is programmed to disguise itself as an ordinary legitimate file. As a result, there might be no obstacles for it to get pass your cyber security. After it slithers, a trojan exposes its secret package – ransomware. Though such distribution method is quite rare, you still need to be cautious. That is why it is required to have a reputable anti-spyware application to block such malware.

Finally, we have come to the most essential part where we will explain more about the elimination process. Due to the elaborate structure of TeslaCrypt 3.0 virus, you might struggle to remove it manually. As mentioned before, it employs complex encryption algorithms, so detecting main malicious files might be too troublesome. However, we suggest looking up the manual guidelines developed by cyber security specialists after you remove TeslaCrypt 3.0 virus automatically. This sequence of action might be more useful and efficient. So after you enabled the system scan by the anti-spyware program, it should locate the main source files of the ransomware and remove them. Nonetheless, one problem might still remain – your encrypted files. As paying the ransom might be pointless, you might be forced to come to terms with the loss of the locked data. However, after you succeed in getting rid of the virus, you will now develop a habit to create regularly copies of the most important documents.

It is strongly recommended to take precautions and secure your computer from malware attacks. To protect your PC from TeslaCrypt 3.0 and other dangerous viruses, you should install and keep a powerful malware removal tool, for instance, Reimage Reimage Cleaner Intego, SpyHunter 5Combo Cleaner or Malwarebytes.

Your opinion about TeslaCrypt 3.0 Cancel reply

You can quickly scan the QR code with your mobile device and have TeslaCrypt 3.0 manual removal instructions right in your pocket.

Vote in our poll
What method did you use to remove TeslaCrypt 3.0?
0.73 % phoned computer support specialists
12.28 % downloaded a security program
29.84 % removed it using free removal instructions
56.34 % used an automatic removal tool and removal instructions
0.8 % contacted support via email
0 % got answer via Ask Us service
Your vote has been submitted!
Vote »
Cannot remove TeslaCrypt 3.0?
See the results »