Mobile banking users should be afraid of Svpeng virus

Svpeng virus is a mobile banking Trojan which was first discovered in 2013. Since then it has been updated and modified so drastically that it reached 37 000 victims per day. Cyber criminals were and still are trying to steal bank card information and other personal information such as contact list from Android users. Malware has been hiding in Google AdSense (an online advertising program) and using particular Google Chrome for Android bug to hack the device. This summer virus researchers have noticed Svpeng malware revival. Victims claim that their devices had been locked when they clicked on some Google AdSense advertisement. Indeed, malware is created to mask itself in order to trick users into clicking on fraudulent browser’s update or a .apk file which is known as a standard Android application file. This hazardous virus has another obnoxious feature – after infiltration to a device, it launches itself and ‘magically’ disappears. Because of this characteristic, this malware is hard to find and the remove. However, you can, and you should remove Svpeng with the help of Reimage Reimage Cleaner Intego. Install a mobile version of this anti-malware/anti-spyware program and run a full system scan.

The virus mostly targets Android users in the United Kingdom, the United States, Germany, Switzerland, and India. The first version of Svpeng virus delivered a fake lock screen sent from FBI and claiming that victims visited adult-themed websites illegally. The latest variant also pretends to be from official and legal organisations and accuses users of accessing prohibited content. Well, if users have visited pornographic websites, they can easily get fooled and believe in this message. In the message cyber criminals requires making a payment in order to get back access to the device. Victims have to transfer 200 USD or 500 USD via MoneyPak (an alternative payment method). The authors of Svpeng malware try their best to encourage users in paying the money; therefore, they even deliver a picture of a victim. However, you should know that it has been taken with your phone’s or tablet’s camera after the attack. If you got infected, do not freak out and stay calm. Do not consider transferring money. Instead of that initiate Svpeng removal. 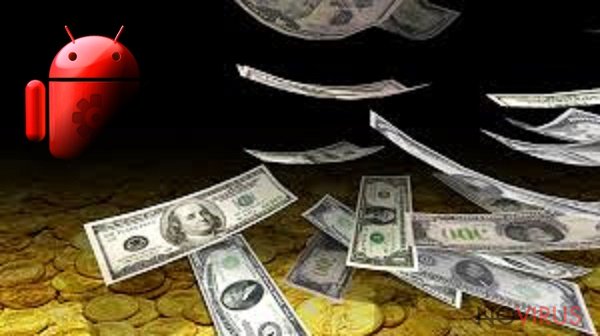 For almost three years an identity and nationality of the hackers are still a hot discussion topic in IT world. Since the appearance of Svpeng virus, it is believed that developers are from Russia. It seemed that these assumptions were confirmed in 2015 when Russian authorities arrested several people who were supposed to be related to this banking Trojan. However, as we can see now, malware is still spreading and stealing money from victims.

How Android devices are infected with this malware?

As we already mentioned, malware spreads using flaws in Google Chrome and take advantage of Google AdSense. However, it might be spread via spam emails, fake Flash updates, illegal or bogus programs. To avoid Svpeng hijack, you should download applications to your Android device only from Google Play Store. Never install any apps from questionable links or messages, no matter how reliable they might seem. If you use some banking applications, make sure that they are official and compatible with Android devices; otherwise, they may not have all necessary security standards. Lastly, you should never let any application activate ‘device administrator’ feature because you will give control of your device for the shady developers. Besides, don’t forget to make data backups regularly. In case of Svpeng attack, you won’t lose all your files.

If you encountered this mobile Trojan, opt for automatic removal. As we have already mentioned at the beginning of the article, you have to install a mobile version of malware removal tool (e.g. Reimage Reimage Cleaner Intego, SpyHunter 5Combo Cleaner), run a full system scan and let the program to remove Svpeng completely. Make sure that you download these programs from the official website and update them before elimination. If you are thinking about manual virus removal, we want to discourage you and ask to forget this idea. It’s a complex malware and trying to remove it manually may lead to the bigger damage.

After Svpeng virus removal reset your Android device to the default settings. But don’t forget to make backups if you want to keep some information from your smartphone or tablet. To reset device follow these steps:

You can quickly scan the QR code with your mobile device and have Svpeng virus manual removal instructions right in your pocket.

Vote in our poll
What method did you use to remove Svpeng virus?
4.96 % phoned computer support specialists
76.04 % downloaded a security program
3.94 % removed it using free removal instructions
13.63 % used an automatic removal tool and removal instructions
0 % contacted support via email
1.42 % got answer via Ask Us service
Your vote has been submitted!
Vote »
Cannot remove Svpeng virus?
See the results »