Mirai virus, meaning the ‘the future’ in the Japanese language, was first discovered in April 2016 when a group of malware researchers has revealed a major discovery of enormous ‘botnet’ – the network of infected machines which are infected with one specific programming code. Since them, the malware has occasionally made into the spotlight by paralysing several dozens of IoT devices. One of the peculiar preference of this threat – it targets exclusively Linux operating systems and IoT devices. Since then, the virus has multiplied into several dozens of infections which are classified into several botnets. The tracks lead to different countries: the US, Brazil, China, etc. One of the latest targets – German telecommunications company ‘Deutche Telecom.’ Even if you are a Windows or Mac OS user, do not let the idea that you are safe from this infection, take over your mind. Get acquainted with Mirai removal and prevention methods.

The credits for developing such massive virtual threat belong to the Internet user called ‘Anna-senpai.’ This user, who supposedly is a fan of the Japanese pop-culture, has remained a mysterious figure in the cyber space. However, an IT expert, Brian Krebs have found interesting evidence which leads to Paras Jha, a prodigy and the president of ProTraf Solutions. Nonetheless, the traces of Mirai botnets have been detected globally. One of the recent versions of this malware Mirai (Linux.Gafgyt.B) has been detected in Brazil.

The original version of Mirai virus mainly targets IoT devices and surveillance devices. In October 2016, it hit one of the biggest DNS providers, Dyn and its customers. It resulted in paralysed Twitter, Reddit, and Spotify accounts. It is suspected that the attack of such magnitude was launched by 10 million corrupted devices. In the same month, a Chinese electronics manufacturer reported hacked DVRs, cameras, and other devices. 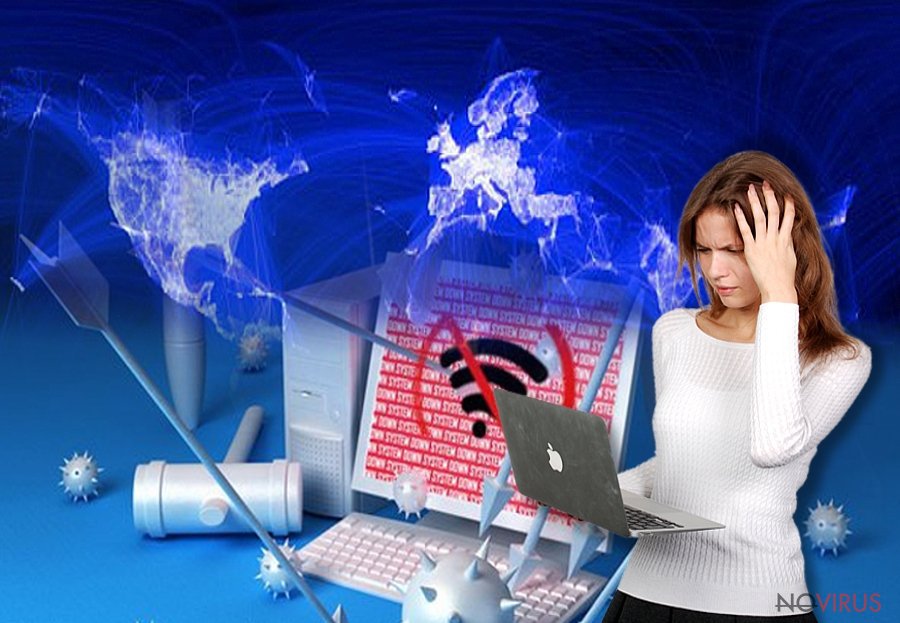 The network of Mirai botnets only keeps expanding.

The attack also reverberated in Europe. In November 2016, about 1 million clients of ‘Deutsche Telecom’ reported having no Internet connection. Virus analysts suspect that the crooks have mishandled the attack: their original purpose was to steal users’ personal data. Regarding this incidents, the malware remains to be one of the biggest and most destructive virtual menaces. Several dozens of Mirai botnets all over the world makes the matters even more complicated. On the other hand, there are still countermeasures and means to remove Mirai virus.

Is there a way to prevent the malware?

Since Mirai virus targets IoT devices and Linux operating systems, you should concentrate on the protection of these systems. Before acquiring a new IoT device, get acquainted with its manual and manufacturer. Change default passwords. You might also alter the present encryption system for the Wi-Fi network to a more elaborate one. Opt from Telnet login to SSH. Once the latest software updates for the device are issued, install them right away. Such advice is applicable for Linux OS users as well.

Since Mirai remains to be one of the formidable virtual infections, proper protection and vigilance are of utmost importance. Bear in mind that Windows or Mac OS-adapted versions might appear in the cyber space as well. Regarding these systems, Reimage Reimage Cleaner Intego or Malwarebytes serve as malware elimination options. They are able to locate the source of infection and terminate all components. Update them regularly. If this menace occupies your device, use the below instructions to regain the full control of the device and then remove Mirai virus.

If you have doubts that Mirai or the threat of similar origin has occupied the computer, turn on the computer in Safe Mode and launch the malware elimination tool.

Using the tutorial provided above you should be able to eliminate Mirai from the infected device. novirus.uk team has also prepared an in-depth data recovery guide which you will also find above.

There are a couple of methods you can apply to recover data encrypted by Mirai:

It is strongly recommended to take precautions and secure your computer from malware attacks. To protect your PC from Mirai and other dangerous viruses, you should install and keep a powerful malware removal tool, for instance, Reimage Reimage Cleaner Intego, SpyHunter 5Combo Cleaner or Malwarebytes.

You can quickly scan the QR code with your mobile device and have Mirai virus manual removal instructions right in your pocket.

Vote in our poll
What method did you use to remove Mirai virus?
2.6 % phoned computer support specialists
9.32 % downloaded a security program
24.22 % removed it using free removal instructions
62.95 % used an automatic removal tool and removal instructions
0.92 % contacted support via email
0 % got answer via Ask Us service
Your vote has been submitted!
Vote »
Cannot remove Mirai virus?
See the results »