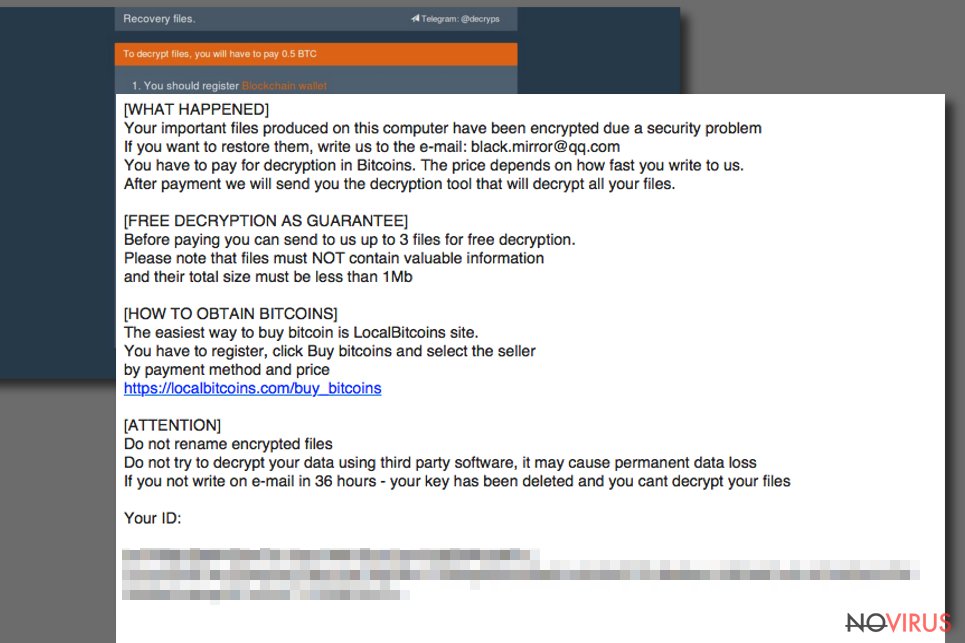 Aleta ransomware is a new data-encoding virus that belongs to BTCWare ransomware family. As soon as it infiltrates the target computer system, it encrypts files, adds .[black.mirror@qq.com].aleta file extensions to their filenames and drops !#_READ_ME_#!.inf file. This file is the ransom note that contains instructions on how to recover encrypted data.

The virus is also known as BTCWare Aleta ransomware. Its functionality hardly differs from earlier BTCWare versions – it is an illegal program designed to temporarily or permanently corrupt files on victim’s computer. There are very few possibilities to recover encrypted data, and of course, everything depends on victim’s choices.

The !#_READ_ME_#!.inf file left on victim’s computer informs the victim about the ransomware attack. It suggests writing to black.mirror@qq.com email to discover data recovery possibilities. Of course, criminals take advantage of victim’s frustration and suggest buying the data decryption tool for a particular price – ransom.

Unlike previous BTCWare variants, Aleta uses only one email address for communication with ransomware victims. For example, Master ransomware used more than ten different email addresses for the same purpose.

Aleta demands 2 Bitcoins per each compromised computer. In British pounds, this sum equals 3700. It goes without saying that cyber security experts do not recommend paying sum amounts of money to cybercriminals, especially when there are no guarantees regarding data recovery.

Remember that fraudsters use all possible methods to make themselves anonymous; therefore it wouldn’t be possible to catch them if they would decide to deceive you. 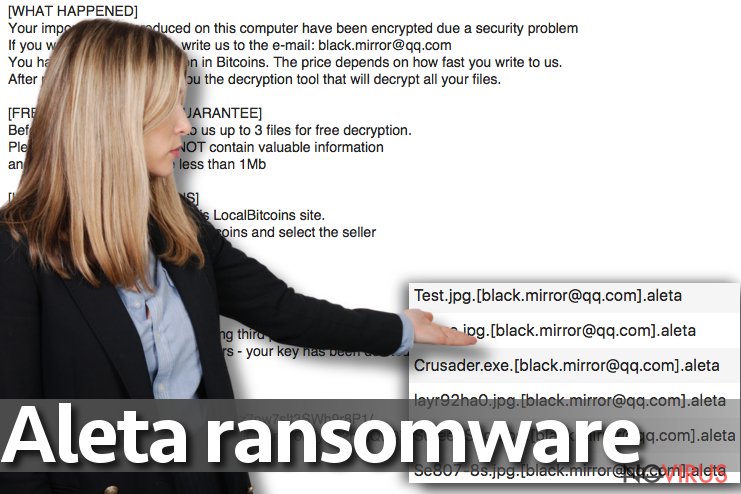 Aleta ransomware virus encrypts victims files one after another, adding .[black.mirror@qq.com].aleta file extensions on its way.

BTCWare Aleta developers suggest testing their decryptor on three files no larger than 1 Mb in their total size. These files can be sent to criminals via email. Criminals claim that their reply will contain decrypted versions of these files.

However, you shouldn’t put your trust in cybercriminals’ promises. We highly recommend deleting the ransomware with an anti-spyware or anti-malware program to protect the system from further damage. To remove Aleta, use trustworthy programs like Reimage Reimage Cleaner Intego or Malwarebytes.

Aleta virus is distributed in a similar way like the rest of viruses from BTCWare ransomware group. They all are promoted via traditional malware distribution techniques such as:

To avoid installing this virus, never open email attachments that come from someone who is a complete stranger to you. Also, remember that scammers just love to pretend that they’re working at legitimate companies.

Just because someone who claims to be from Amazon sent you an invoice or a receipt in a letter filled with Amazon logos, it doesn’t mean that you are talking to a real employee. It can a scammer trying to push malware to your computer.

To ward off ransomware distributed in different ways, you will need a powerful anti-malware solution and a data backup. These are two must-haves in order to bypass tragic consequences that ransomware can cause.

It can be hard to remove Aleta virus because it tends to create obstacles for anti-malware or anti-spyware to start. To prepare a safe environment for malware removal software, restart your PC into Safe Mode with Networking.

The 2-spyware team says that there should be no attempts to perform a manual BTCware Aleta removal. This ransomware is highly sophisticated, and unless you are a professional malware analyst, most likely you won’t find all files and programs associated with the virus.

You can only remove Aleta after rebooting your PC into Safe Mode with Networking. This tutorial explains everything from A to Z to ease the task for you.

Using the tutorial provided above you should be able to eliminate Aleta from the infected device. novirus.uk team has also prepared an in-depth data recovery guide which you will also find above.

We do not recommend paying the ransom to Aleta developers because malware analysts managed to create decryption tools for previous versions of BTCWare. Therefore, you can either test your patience, or try one of data recovery methods listed below.

There are a couple of methods you can apply to recover data encrypted by Aleta:

Check out this data recovery tool

Data Recovery Pro is a software praised by many users who accidentally deleted or corrupted their files. Although it wasn't balanced to work on files encrypted by ransomware, we still recommend trying it.

It is strongly recommended to take precautions and secure your computer from malware attacks. To protect your PC from Aleta and other dangerous viruses, you should install and keep a powerful malware removal tool, for instance, Reimage Reimage Cleaner Intego, SpyHunter 5Combo Cleaner or Malwarebytes.

You can quickly scan the QR code with your mobile device and have Aleta ransomware virus manual removal instructions right in your pocket.

Vote in our poll
What method did you use to remove Aleta virus?
0.26 % phoned computer support specialists
7.53 % downloaded a security program
74.31 % removed it using free removal instructions
17.91 % used an automatic removal tool and removal instructions
0 % contacted support via email
0 % got answer via Ask Us service
Your vote has been submitted!
Vote »
Cannot remove Aleta virus?
See the results »