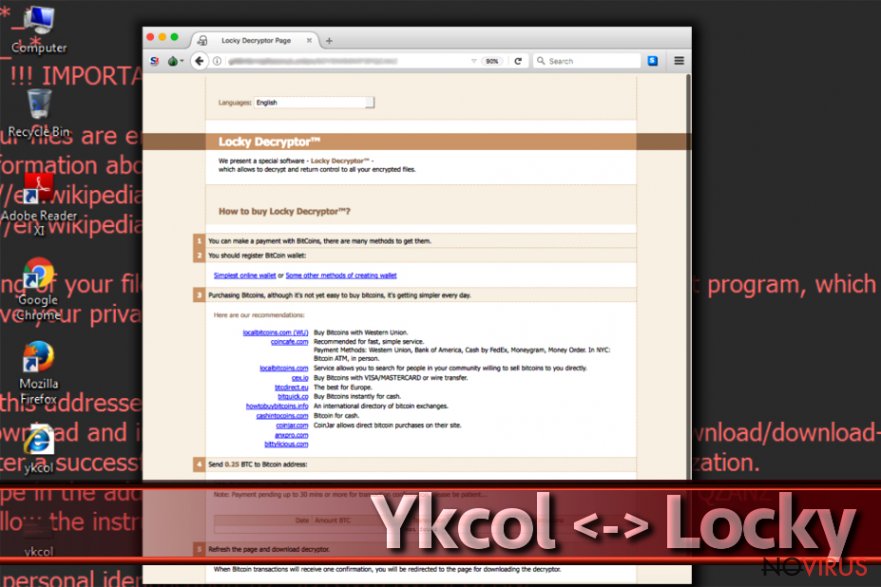 Ykcol virus is a subsequent version of Locky crypto-virus following Diablo6 and Lukitus variations. Likewise, it employs RSA-2048 and AES-128 algorithms. After completing the encryption process, all data is marked with .ykcol file extension and leaves ykcol.bmp and ykcol.html files.

The former file will be set as the background picture informing about the locked data; the .html file will open up in the browser. It includes links in order to assist victims with the payment procedure.

Following the manner, the developers ask victims to install Tor browser and access a specific .onion site and promotes Locky Decrypter. The latter software has been promoted since the emergence of the original version. The initial demanded ransom was 0.25 bitcoins, but recently, the cyber villains have increased the amount again up to 0.5 which amounts to £1300.

The new version does not exhibit any new features. This time developers did not bother themselves making up an elaborate name as they simply reversed the name Locky backwards. The felons also stick to the same distribution campaign – spam emails.

If you have encountered this virtual misfortune, it is not recommended to waste time or nurture hopes that the fraudsters will return all or unaffected data. Therefore, you can attempt to recover data using third-party tools or use backups. Before that, remove Ykcol virus. Reimage Reimage Cleaner Intego or Malwarebytes will be of assistance.

The malware also exhibits a tendency to use Necurs botnet to send out emails with the ominous attachments. In addition, this version ceased to use C2 server and now limits itself to operating offline.

It is highly recommended to eradicate the ransomware a soon as possible. In addition, do not get tempted to install Locky Decrypter as it may only facilitate the hijack of the system in the future.

Since the beginning, Locky developers maintained the same tendency to disguise Locky ransomware in a supposed invoice. Ykcol variation does not differ much either. However, Lukitus version manifested a new feature to deliver the malware in a .7z folder. It contains a VBS script which accelerates the execution of the malware.

The counterfeited messages are supposed sent by the representatives of official institutions. Some of such emails ask users to verify the content of the attached invoice. Locky developers also target company servers and plague them with spam emails containing fake scanned images.

They are named as ‘scanned picture of printer [model].’ Likewise, escaping the menace delivered in such method might turn out quite challenging. Few employees might notice that the name of the printer mismatches with the one present in the company.

In overall, it is necessary to only remain vigilant while coping with these spam emails, but ensure cyber security. Some anti-virus and malware elimination tools grant users the feature of spam filtering and reducing the number of such messages. 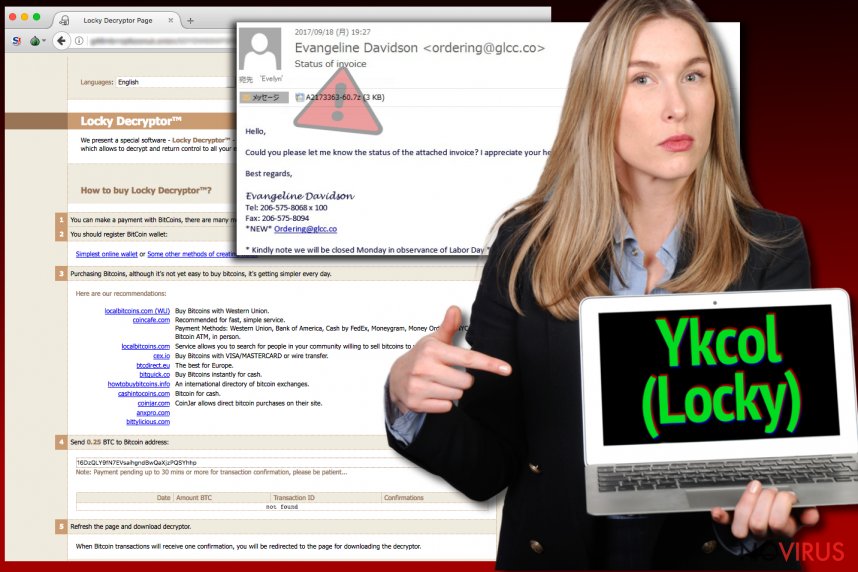 With the alternative name or not, Locky or Ykcol fishes for new victims with spam emails

Though Locky is present on the cyber space, IT experts have not created a sufficient decryption tool. However, it does not mean that you should play according to the felons’ scenario. Launch malware elimination program and remove Ykcol virus. It is not surprising if you fail to do so in the first attempt.

Below instructions display how to restart the device into Safe Mode and finish Ykcol removal. In case you still fail to launch the program, change the name of the executable file of the program. Some malware threats tend to block the execution of certain programs. Then, proceed to data recovery.

This guide will show how you can reboot the system into Safe Mode. This mode allows access to vital system functions and likewise bypasses a possible malware intervention.

Using the tutorial provided above you should be able to eliminate Ykcol from the infected device. novirus.uk team has also prepared an in-depth data recovery guide which you will also find above.

Since Locky and its latest version Ykcol still remain undecryptable, the most viable and sufficient method is to recover data from backups. If you did not make them, take a look at further suggestions.

There are a couple of methods you can apply to recover data encrypted by Ykcol:

Though this tool is created for restoring damaged and lost files, it may prove to be practical restoring access to the affaected data.

IT experts warn affected users not to meddle with the perpetrators and restrain from remitting the payment.  There is no guarantee that the after wasting a thousand of pounds, they will send the data back to you. Locky developers are known to cooperate with major companies-victims, but you never know whether they will play fair when returning your data.

It is strongly recommended to take precautions and secure your computer from malware attacks. To protect your PC from Ykcol and other dangerous viruses, you should install and keep a powerful malware removal tool, for instance, Reimage Reimage Cleaner Intego, SpyHunter 5Combo Cleaner or Malwarebytes.

You can quickly scan the QR code with your mobile device and have Ykcol ransomware virus manual removal instructions right in your pocket.

Vote in our poll
What method did you use to remove Ykcol virus?
1.92 % phoned computer support specialists
8.69 % downloaded a security program
68.59 % removed it using free removal instructions
20.13 % used an automatic removal tool and removal instructions
0.67 % contacted support via email
0 % got answer via Ask Us service
Your vote has been submitted!
Vote »
Cannot remove Ykcol virus?
See the results »