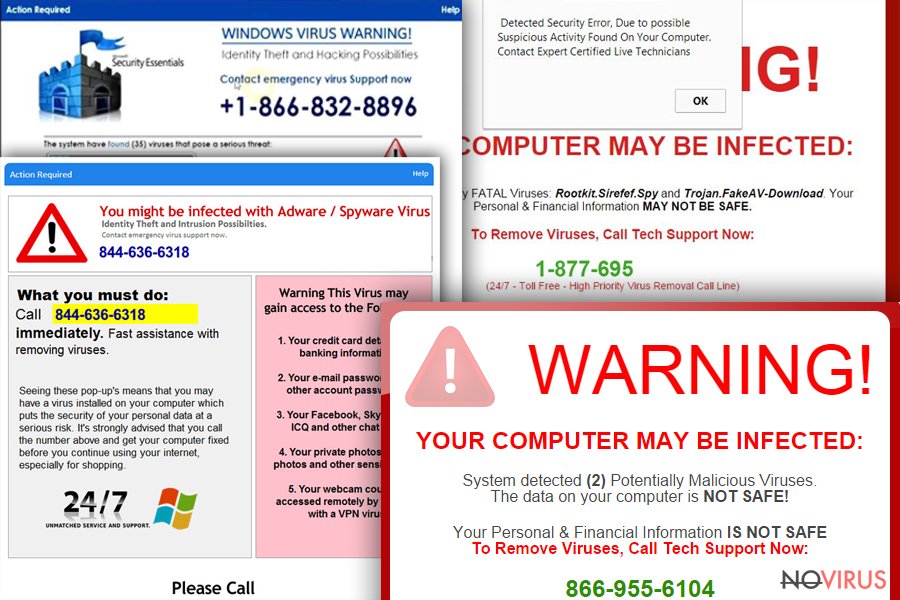 Zeus virus is a dangerous banking trojan that was terminated in 2011. However, bad actors are now using the name of the virus to scare users into calling fake tech support numbers

Zeus virus (also known as ZeuS or Zbot) is a trojan horse that was first released back in 2007 for Windows operating systems and primarily used to steal financial data from victims, although it is not the only feature of the cyber threat. It was also used to insert CryptoLocker ransomware and record keystrokes. In addition, malware was involved in a massive compromise of high-profile organization sites from NASA, ABC, Oracle, Amazon, Cisco, and others. The multi-million dollar illegal business resulted in the arrest of more than 100 people related to Zeus trojan. At its prime in 2009, the virus infected 3.6 million machines worldwide and formed a most massive botnet to date. However, once ZeuS virus was terminated in 2011, tech support scammers started to actively abuse the name of the threat, inserting phishing messages into various websites and threatening users that their sensitive information will be compromised if they will not contact the alleged support via the provided number.

Since Zeus virus is no longer operational (although there is no guarantee that there is absolutely no chance of getting infected), we will focus on tech support scams in this article. By reading this post, you will find out how browser-based scams work, what causes them, and how to remove Zeus virus associated pop-ups and notifications.

Zeus trojan fake pop-ups can be encountered on Google Chrome, Internet Explorer, Mozilla Firefox, Opera, Safari, or any other browser. While such confrontation does not necessarily mean that the PC is infected with any type of malware, it might indicate adware presence. Nevertheless, users can encounter a fake Zeus trojan when redirected from another malicious website.

Adware is an ad-supported program that is distributed in software bundles. Typically, users will not notice its entry point, as it is deceptively hidden inside the installers of freeware or shareware applications. Its primary goal is to redirect users to sponsored sites and display pop-ups, deals, offers, coupons, and other commercial content.

Such a scheme provides adware authors with juice ad revenue, and the more users are exposed to the adverts, the more profit is gained. Unfortunately, adware authors usually do not check the sites they are affiliated with, which results in redirects to malware-laden, survey scam, or support-scam sites like “Zeus Virus Detected.” 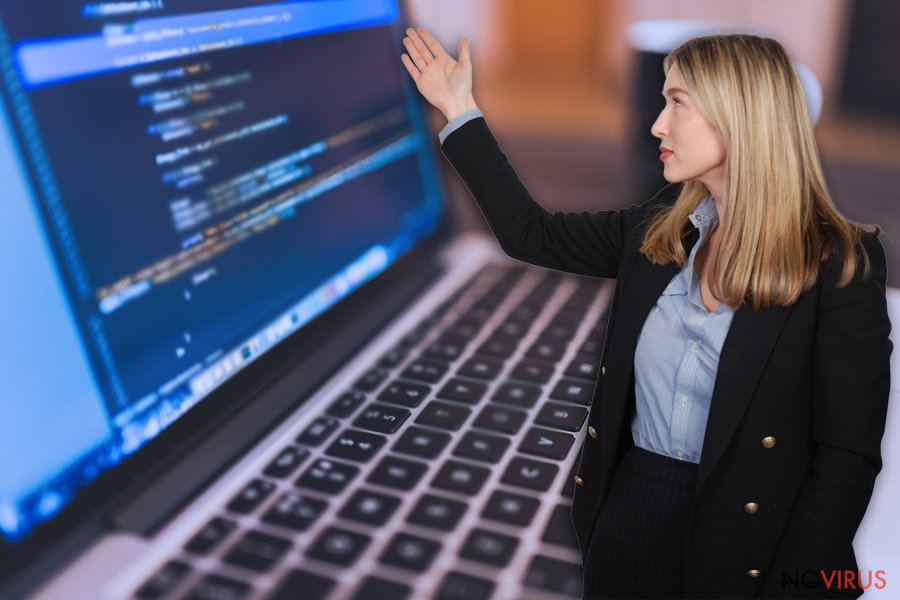 Zeus virus is one of the biggest malware examples that infected millions of users or organizations. However, the name of the trojan is also used by crooks to make users believe that their personal information is in dager of being stolen

To remove Zeus virus tech support messages from the browsers, users will have to eliminate adware that is spawning such messages. Unfortunately, it is not that easy in some cases, as PUPs might be hiding under legitimate names or use other stealth tactics.

Therefore, in some cases, it is best to use security software that can detect and take care of Zeus virus removal automatically. We also advise users to scan their devices with Reimage Reimage Cleaner for best results.

Most of the time scammers offer to buy a bogus antivirus program. Therefore, while browsing the Internet users may receive a pop-up or ad that informs that Zeus virus has been detected on their computers. Of course, seeing this message, it’s hard to stay calm and not to freak out.

However, you should know that warnings about computer infections can deliver only the antivirus program that you have installed on your PC. If you encounter this ad, do not click on it. You may be redirected to a potentially dangerous website where you may be offered to purchase a fake program that can remove Zeus virus, or call fraudulent technical support services. 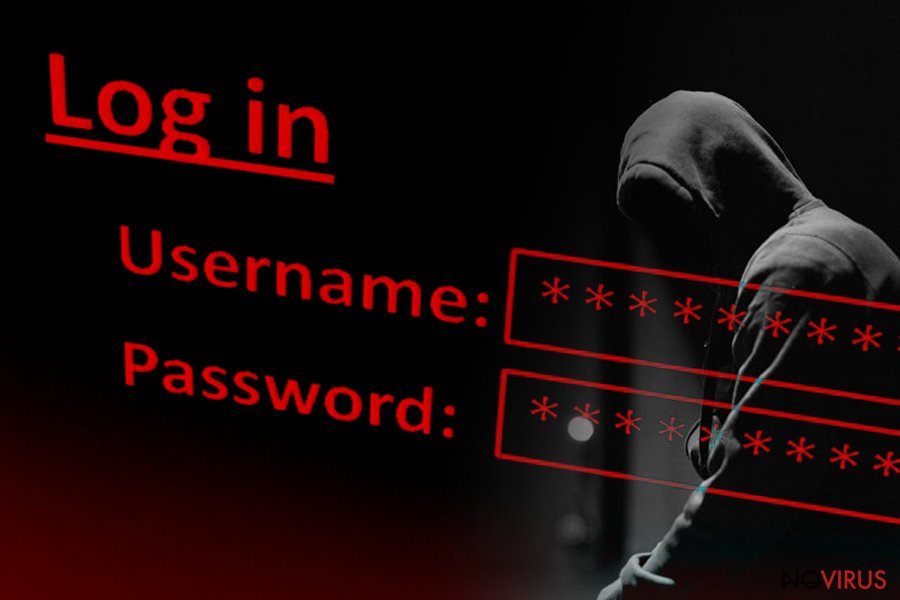 If you see one of these phone numbers, do not consider calling them: 1-800-014-8826, 1-844-324-6233 or 1-844-680-1071. They may be charged a lot, and Zeus virus scammers may try to get your personal information. When warning messages keep popping up on your browser, you should scan your computer with anti-malware software and let it remove all malicious components that have sneaked inside your PC. The same program can be used for Zeus removal as well.

There are several different pop-up messages users can encounter that claim the Zeus virus infection. We will discuss some of them.

Windows Defender alert: Zeus virus is a scam that appears on a random website and displays a message that reminds a Blue Screen of Death window. Bad actors often imitate the looks of legitimate messages in order to make the hoax more believable.

Users might be shown Windows Defender Alert Zeus Virus Detected notification if they get redirected from an unsafe site or due to adware infection. The page, engineered by crooks claims that Windows Defender (which is a built-in security software from Microsoft) has detected a Zeus virus on the device, and asks users not to restart the PC.

Bad actors then proceed explaining that such personal data like banking information, passwords and other details will be compromised unless the alleged technical support at +1-844-313-7003 (number might vary) is contacted.

The truth is, closing the page will not result in anything, and contacting cybercriminals is the worst solution. Instead, users should scan their devices for adware or other PUPs to stop fake Windows Defender Alert Zeus Virus Detected alerts. 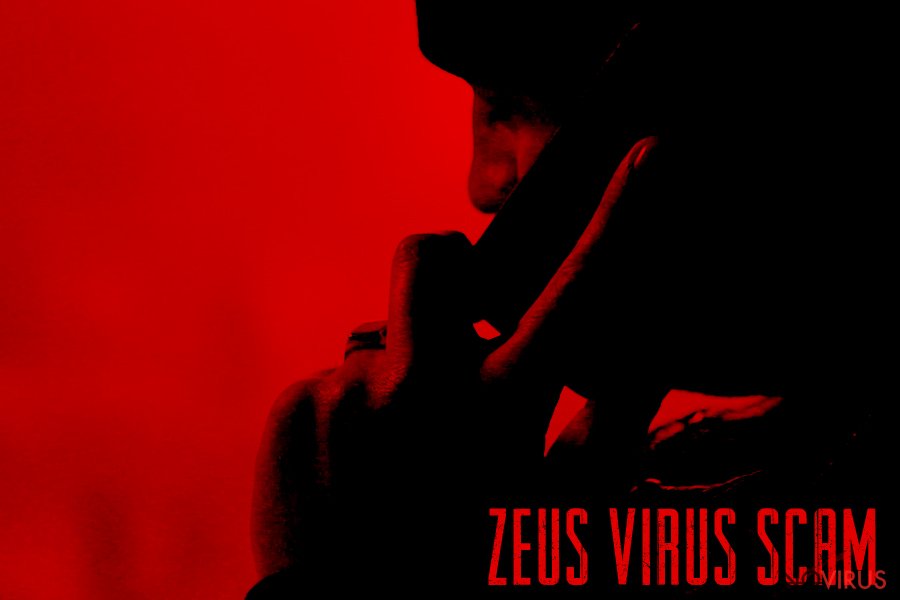 Malicious actors try to convince users that their computers or/and personal information is in danger. They often demand unsolicited payments for bogus services or fake software

You Have a ZEUS virus

You have a Zeus virus scam is a variant of a tech support scam that urges users to call 1-844-859-0337 due to Zeus virus infection. In addition to the usual threat of personal information being stolen, this variant claims that the entire hard drive will be deleted:

WARNING! Your Hard drive will be DELETED if your close this page. You have a ZEUS Virus! Please call Support Now!. Call Toll-Free: 1-844-859-0337 To Stop This Process

The deletion of “hard drive” can be only accomplished by ransomware type that is called wiper. Such viruses are created to encrypt or corrupt data on the device without a possibility to restore it. Developers of such malware do not send out messages to victims that their data will be deleted, as it is counterproductive.

Additionally, You have a Zeus virus scam authors did not express themselves that well, as deletion of hard drive literally means the removal of hardware, which is impossible. It is always beneficial to catch crooks making such mistakes – it makes recognition of the hoax much easier.

Security Update Error 0xB6201879. Authentification required is a scam message that is very similar to other variants that use a blue background to imitate BSoD error message. However, the fake Error 0xB6201879 also spawns a pop-up window that prompts users to enter the Username and Password. It is unclear what type of credentials hackers are asking for, but listing the details is not a good idea. The pop-up message states: 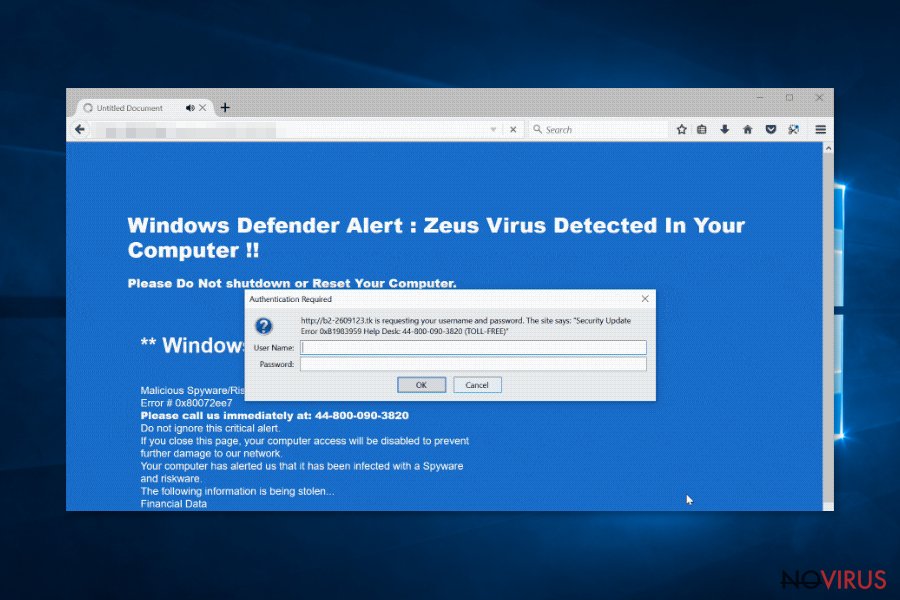 Those who contact the fake tech support might be asked to perform several actions that should not be done in any case when thinking about computer security:

As usual, do not trust a word that the fake tech support says, as it is all done for the monetary benefit and is entirely false. Do not contact bad actors in the first place – there is no need to. Instead, hurry up and remove adware associated with fake Zeus virus messages.

Adware leads to malicious sites – here's how it is distributed

Adware is software that is sponsored by advertisements. While there is nothing wrong in such a monetizing method, it is sadly not used correctly by most PUP developers. Ads are often connected in a giant network automatically, the information about user browsing habits is also shared between parties. The scheme is so large that tracking the connections becomes almost impossible.

Showing relevant ads to users might even improve the experience and help them find what they need. However, persistent and intrusive ads that sometimes lead to malware-ridden and phishing sites are straight out malicious and can result in horrible consequences.

Therefore, adware is not a welcomed guest on anybody's PC, at least not on those who value their online privacy and computer security. There are several mitigation means to reduce the chance of infection: 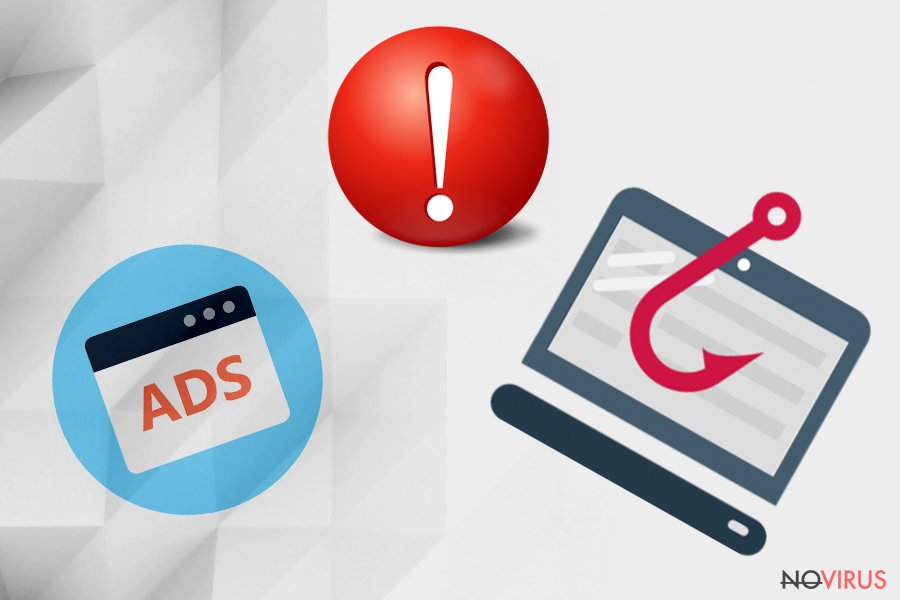 Most adware is distributed via software bundling, although users can download a deceptive program from unknown third-party sites

There is a very little chance of you getting infected with a real Zeus trojan virus, as it is very old and has been discontinued for many years. Nevertheless, as we previously stated, it does not mean that the infection of the threat is impossible. However, most modern security solutions would take care of Zeus virus removal, as long as the program is up to date.

In case you are suffering from redirects to suspicious and phishing sites, you need to remove Zeus virus adware associated with the unwanted activity. You can use our manual instructions below or make use of a security application that focuses on PUPs. While the former solution might be effective, experts recommend scanning the device with anti-malware software regularly.

You may remove virus damage with a help of Reimage Reimage Cleaner . SpyHunter 5Combo Cleaner and Malwarebytes are recommended to detect potentially unwanted programs and viruses with all their files and registry entries that are related to them.

If your macOS is displaying the signs of adware infection and browsers are redirecting you to scam sites constantly, follow this guide:

As soon as you eliminate adware from your device, reset MS Edge to its default settings:

After completing these steps, Microsoft Edge should be Zeus Trojan-free.

Adware can inject other applications without consent, such as browser hijackers. These PUPs are developed to change web browser settings. To revert these modifications, reset Google Chrome:

You can quickly scan the QR code with your mobile device and have Zeus Trojan manual removal instructions right in your pocket.

Vote in our poll
What method did you use to remove Zeus Trojan?
4.45 % phoned computer support specialists
13.04 % downloaded a security program
15.49 % removed it using free removal instructions
65.49 % used an automatic removal tool and removal instructions
0 % contacted support via email
1.53 % got answer via Ask Us service
Your vote has been submitted!
Vote »
Cannot remove Zeus Trojan?
See the results »