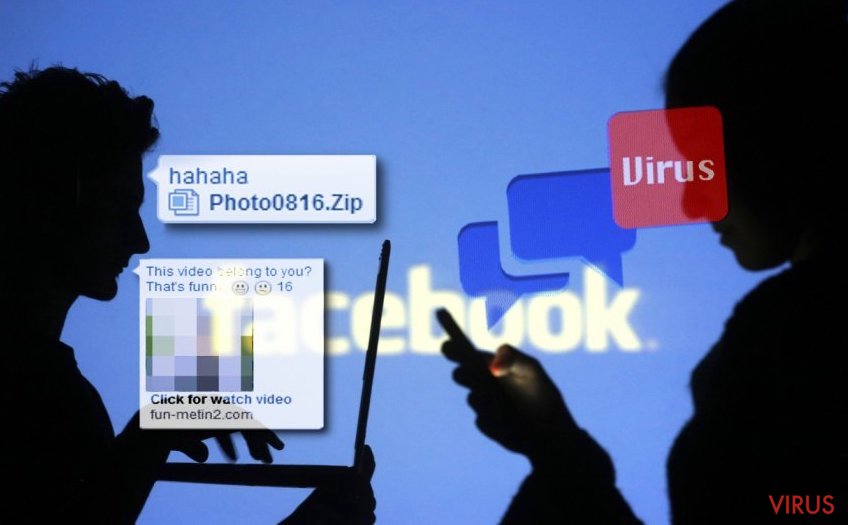 Facebook virus is a collection of malware encompassing the threats which operate in this particular social website. This is because Facebook has become one of the most popular social networks and has been targeted by cyber criminals for a while now.

The main danger of these infections is that you might not have the slightest suspicion that the message which is seemingly sent by your friend is actually a virus. Thus, in this article, we will present you the main types of this particular threat and the ways to remove Facebook virus effectively. One of the methods to perform that is to eliminate it with the help of Reimage Reimage Cleaner Intego.

Have you heard of computer worms or trojans? If not, then we are glad to enlighten you about them. They might be related to the current virus since it operates in similar ways as the former do. Computer worms have the peculiarity to infiltrate your social or Internet accounts and then automatically send malicious links to your contact friends. Thus, your contacts might not have any suspicion that the message with the hyperlink is actually automatically generated by the virus. 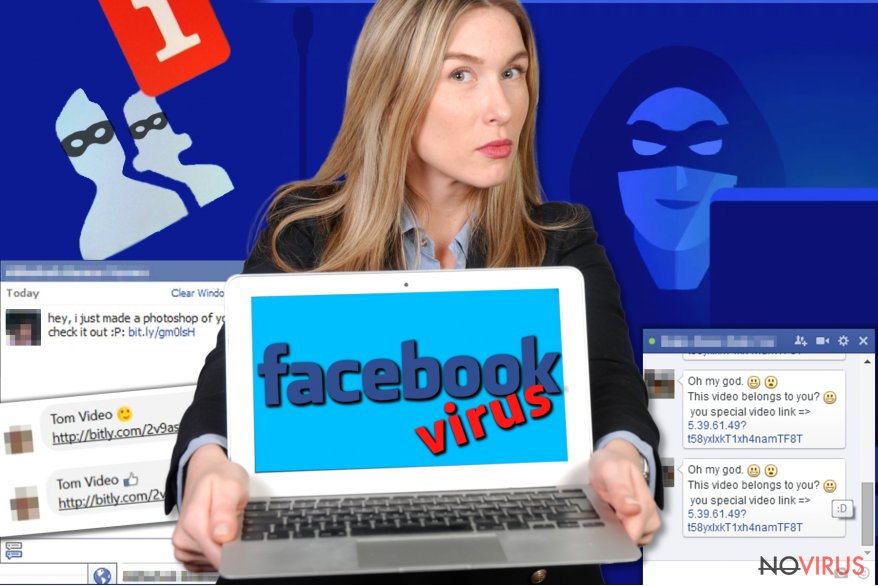 In the case of Facebook Friend Request, you may already guess that it sends out friend invitations to multiple unknown people. Thus, if they accept the friend request, they get entraps into the claws of this menacing virus. In other words, their accounts become hacked. Unwillingly, your friends turn into virus distributors. Despite this peculiarity, the infection may also cause system wreck and might attempt to steal personal information, such as banking data.

Let us proceed further. From to time, the cyber criminals also manifest their mastery and creativity. Facebook Change Colour virus comes in the form of a suggestion to change your account or background colour. At first glance, this odd offer may reach you via a message which is sent from your friend. However, stay vigilant and do not fall into this trap. Once you follow the instructions or click the provided link, you may bid farewell the Facebook account. One click decides whether your computer remains secure or gets entangled by the menace.

Facebook ‘hahaha’ virus operates the same way as other variations of this malware. It comes in the form of a message which contains a .zip attachment. In order to convince users into opening this attachment, hackers try to appeal to users’ sense of curiosity.

The message may be entitled as ‘Funniest video ever’ or ‘Watch this hilarious video.’ Once you recklessly open the link, your computer is turned into a Bitcoin mining device. Needless to say, that once the threat targets your computer, it aims to infect all the contacts on your friends’ list. Therefore, you should hurry up with Facebook virus removal.

Facebook malware may also come in the form of adware. Facebook Stalker application enables you to see which users are following or who secretly checks your account regularly. In most cases, this virus may happen to appear in younger users', particularly teenagers, computers. Since they are less aware of the menace, which might befall them, the recklessly permit the application to access their profile and personal information.

Facebook YouTube virus showed up in October 2017. This version spreads the message trying to convince its victims that there is a YouTube video with the user involved into it. It seems that you will be redirected to “YouTube” page after clicking. However, you are asked to download some “required” plugin before that.

Pay attention that a real YouTube video, if it is sent to you via Facebook messenger, shows you the YouTube icon and a screenshot of the video. In this case, it is obvious that hackers have started using new techniques to infect users' computers.

Unfortunately, they might not have the slightest idea what misfortune they released from a Pandora box by installing the program. Like in previous cases, their accounts become hijacked, and the safety of their contacts’ devices becomes threatened as well.

You should also treat carefully the posts published by your Facebook friends. If you suspect that the video which they seemingly promote is not originally sent by themselves, avoid clicking on it. This link may be just bait. In general, any links to ‘hilarious, funny videos’ should be treated with utmost cautiousness.

As you can see, Facebook virus varies in terms of operation, but its versions are evenly destructive and highly damaging. Not only your acquaintances are infected, but your personal information, such as other account passwords and login information to the banking account. remain under the risk.

IT experts speculate that these trojanised threats come from malignant file sharing domains. Thus, you should avoid surfing in those websites and pay attention while installing new applications. Checking the official publisher of one or another program might be useful as well.

Facebook virus infected its victims via Messenger. It tricks them into believing that there is a video related to them spreading around.

For an ordinary user, it might be difficult to identify what kind of Facebook virus infected his or her computer, i.e., a trojan or a computer worm. Even for IT professionals locating the malware becomes a challenging task, so you should not waste time and energy on manual elimination.

Install an anti-spyware program (recommended ones are Reimage Reimage Cleaner Intego and SpyHunter 5Combo Cleaner) which is able to easily detect and remove Facebook virus. The software also serves as a guardian of the operating system.

If you keep it updated, you might surf the Web without any concern that a trojan or even ransomware attacks your computer. To improve the security level, you should run the main anti-virus and anti-spyware applications simultaneously.

It is recommended to update the backups in parallel each time the system is modified. This way, you will be able to access the latest saved data after an unexpected virus attack or system failure. Backing up your files daily or weekly should become your habit.

By having the latest copies of important documents and projects, you will avoid serious inconveniences. File backups are especially useful if malware attacks your system unexpectedly. We recommend using the Data Recovery Pro program to restore the system.

You can quickly scan the QR code with your mobile device and have Facebook virus manual removal instructions right in your pocket.

Vote in our poll
What method did you use to remove Facebook virus?
2.99 % phoned computer support specialists
84.4 % downloaded a security program
2.71 % removed it using free removal instructions
9.77 % used an automatic removal tool and removal instructions
0 % contacted support via email
0.14 % got answer via Ask Us service
Your vote has been submitted!
Vote »
Cannot remove Facebook virus?
See the results »