DoubleLocker is the ransomware for Android: it changes the PIN code and asks for a ransom 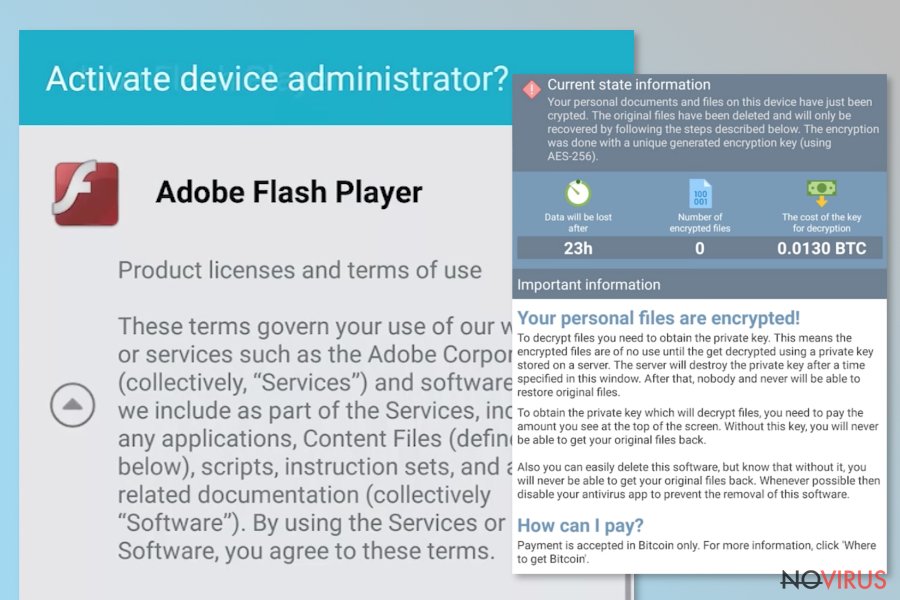 DoubleLocker virus is a ransomware that targets Android device users. Users should be extremely careful when installing Adobe Flash player updates because this Android virus tends to pose as one. The modus operandi of malware consists of two stages: firstly it tries to steal victim’s PayPal as well as bank account login details and later encode all files using cryptography algorithms. During the encryption, the ransomware appends a .cryeye extension to target files.

The deceptive program locks the mobile device and demands to pay the ransom. It clearly functions as a mobile extortion tool that takes victim's device and data stored on it hostage in exchange for a certain sum of money. It is evident that malware has features of the banking trojan and file-encrypting virus, not to mention that it might get complicated to remove DoubleLocker.

Cyber researchers state that it is the first example of Android ransomware that misuses accessibility services on Android OS. As we previously said, the virus spreads in the form of a fake update, which, once launched, requests user's permission to activate an accessibility service under the name 'Google Play Service.'

Such trick easily forces inexperienced computer users to give the malware an approval to launch the malicious payload. Therefore, if you unknowingly allowed this intruder to infect your mobile device, remove DoubleLocker virus using Malwarebytes or another mobile-friendly security software. Below, you can see a brief summary of virus' modus operandi:

Clearly, authors of the malicious virus want to receive the money transfer as soon as possible, so they promise to trash victim's data after a day in case the victim decides not to pay the ransom. However, trusting fraudsters would be a bad idea.

Therefore, we recommend you to take actions regarding DoubleLocker removal. In case you were using an online data storage service, you can try to recover your files from it. However, we must remind you that any steps regarding data recovery should be taken only after deleting the ransomware from your device. 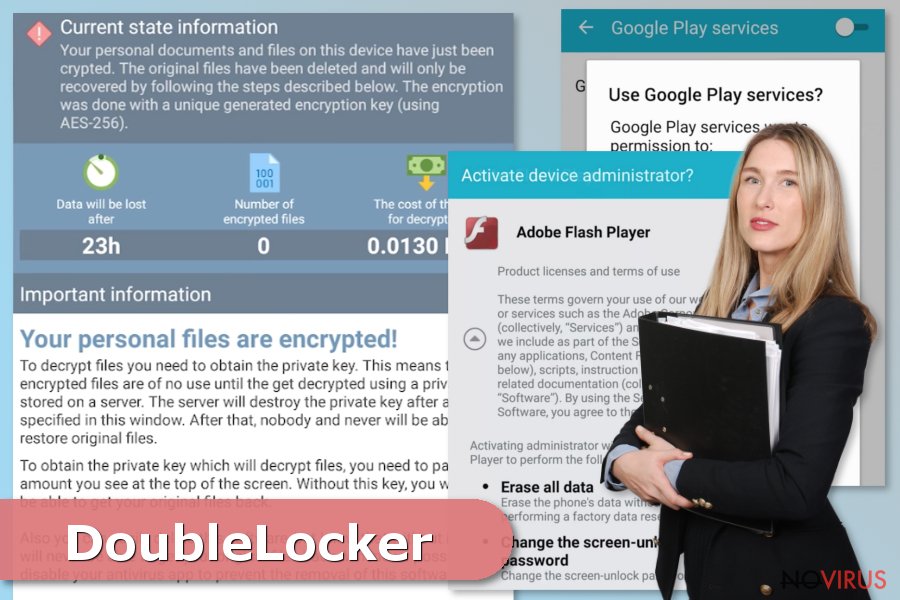 We want to emphasize that Android ransomware spreads as a fake Adobe Flash update on the suspicious websites. Therefore, our IT specialists encourage users to only use Google Play Store for new app installations or upgrades. However, the suggested App Store is known to provide malicious applications from time to time, so we strongly recommend you to read app reviews before installing them. In addition, adding a proper security software to your device is just a must, too.

Finally, to protect your mobile against malware, security experts suggest following safe browsing rules and avoiding shady-looking content online (such as aggressive ads or low-reputation websites)/ Even an accidental click on a corrupted link can trigger the installation of various types of adware, spyware, etc. Thus, do not open suspicious attachments in your email or other social networking platforms and never download unauthorized system tools promoted in pop-ups.

It might be hard to perform DoubleLocker removal if your Android device is non-rooted. In this case, firstly you have to reset the phone to the factory state in order to unlock it. Afterwards, it is possible to get rid of the ransomware using a reliable security software, such as Malwarebytes.

If your mobile has enabled debugging model and is under attack, you can use Android Debug Bridge (ADB) tool. This way you do not have to reset the phone to factory state to unlock it and remove DoubleLocker virus. Shortly after your PIN is reset, you can uninstall the malware using any kind of anti-malware software compatible with the Android operating system.

It is recommended to update the backups in parallel each time the system is modified. This way, you will be able to access the latest saved data after an unexpected virus attack or system failure. Backing up your files daily or weekly should become your habit.

By having the latest copies of important documents and projects, you will avoid serious inconveniences. File backups are especially useful if malware attacks your system unexpectedly. We recommend using the Data Recovery Pro program to restore the system.

You can quickly scan the QR code with your mobile device and have DoubleLocker ransomware virus manual removal instructions right in your pocket.

Vote in our poll
What method did you use to remove DoubleLocker virus?
3.14 % phoned computer support specialists
81.97 % downloaded a security program
3.77 % removed it using free removal instructions
11.01 % used an automatic removal tool and removal instructions
0 % contacted support via email
0.1 % got answer via Ask Us service
Your vote has been submitted!
Vote »
Cannot remove DoubleLocker virus?
See the results »