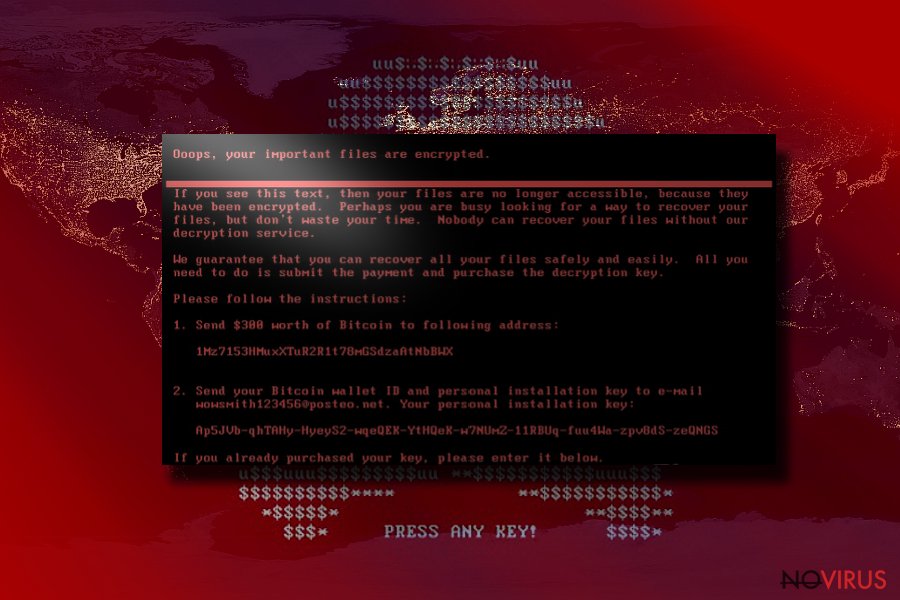 Cybersecurity specialists have discovered that a well known ransomware virus – Petya virus – has been recently updated. The latest its variant, Bad Rabbit, belongs to the same group of viruses. Thus, its primary mission is to encrypt confidential data and make it inaccessible for a victim unless he or she pays the ransom.

It seems that the virus targets German-speaking users, however, do not let your guard down thinking that you will escape the infection. It has also been noticed in almost every Europe's country.

Analysts have already recorded the victims — companies such as ‘Maersk’, ‘Roseneft’, ‘Saint — Gobain’, a few banks and power suppliers, as well as recently infected Odessa’s International Airport together with Russian media groups ‘Fontanka’ and ‘Interfax’.

If you wonder who hides underneath Petya, IT experts claim that they have found serious evidence of ‘MeDoc’ company being a primary ransomware distribution source. However, it still hasn't been proved at the moment.

If you have already fallen into the trap of this virus and are about to pay the money, do not proceed with the transaction! We offer you a solution – Petya removal. In order to eliminate it completely you might need an antispyware program. One of the trustworthy software is Reimage Reimage Cleaner Intego. 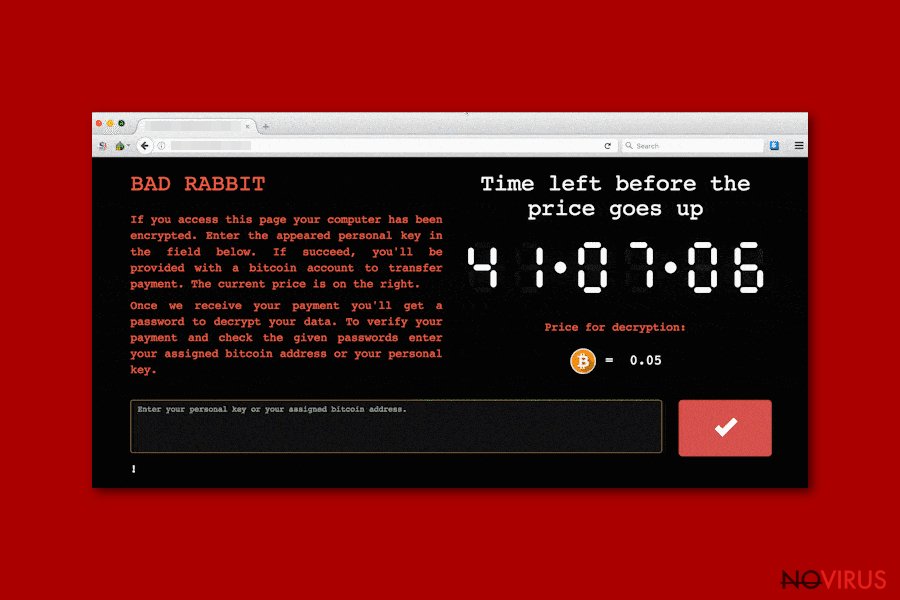 Ransomware uses complex algorithms to encode files on your computer

There are quite intriguing facts about Petya ransomware. It has been observed that it uses RSA-4096 and AES-256 algorithms which are said to be used by state militaries for encoding top secret files. Unlike other major ransomware threats, the virus forcefully restarts your operating system.

Once the computer is rebooted, the notification emerges declaring:

DO NOT TURN OFF YOUR PC! IF YOU ABORT THIS PROCESS, YOU COULD DESTROY ALL OF YOUR DATA! PLEASE ENSURE THAT YOUR POWER CABLE IS PLUGGED IN!

This warning appears due to the fact that the virus is encrypting your files. Thus, it alarms you not to interrupt the process. Convinced that it is a system error, you wait several minutes until ‘PRESS ANY KEY’ appears on the screen. It only takes a blink of an eye until you go spare after realising that all your highly essential documents and files are encrypted.

Moreover, the ransom note sets the time period within which you are obligated to pay a 0.9 Bitcoin ransom which equals to $400. Cybersecurity experts have already reported that the criminals changed their conditions and the value of the payment decreased to $300.

Moreover, you should be aware that data encryption is not the only feature of the ransomware. Unlike other malware, Petya is designed to modify computer’s master boot record (MBD) settings. Thus, the only way to remove the ransomware is to restore them.

While many might think that malware elimination works as a decryption process as well, remember, that in most of the situations a decryption key is necessary to regain access to your files. However, in this case, even it won’t help — Petya is not able to maintain required correspondence with Command/Control servers. In other terms, victims are not identified with specific numbers which are later used to match them with proper decryption keys.

Thus, malware experts defined the ransomware as a data wiper, since it generates useless random numbers/characters instead of providing a specific decryption key. In spite of that, you should not meet cybercriminals’ expectations and rush to remove Petya because even if you pay the ransom, your files will remain encrypted.

If you haven’t enabled a function on your computer to automatically store backup copies in the cloud, you can try alternative recovery methods provided at the end of this article. IT professionals finally developed a decryptor that can be acquired as a CD disk or as windows executable file. Read instructions below in order to find out how to use it.

However, our team informs you that the victims who suffered from PetyaWrap or EternalPetya versions of the parent program, will not be able to recover their files with the decryptor. 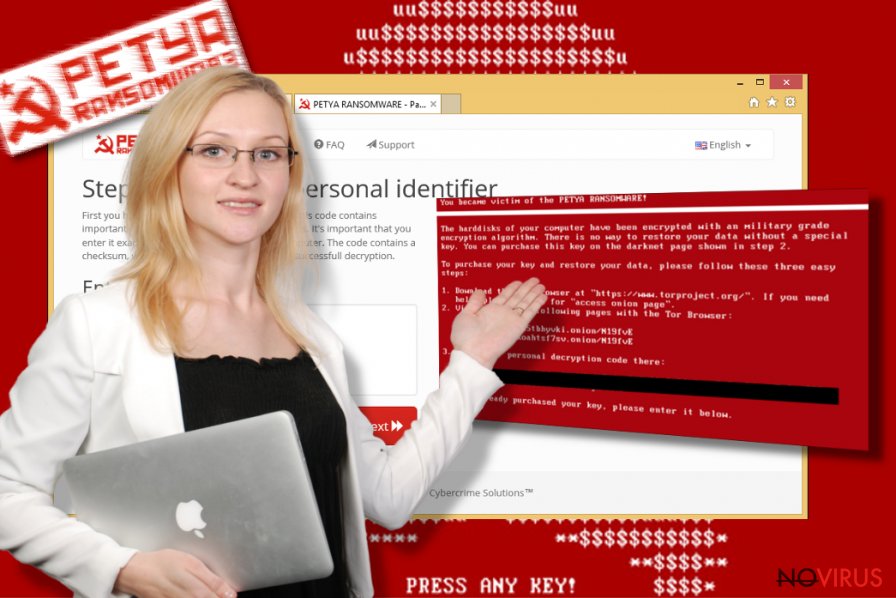 Bad Rabbit ransomware virus. Since October 2017, the virus has been distributed as a fake Adobe Flash Player Update. Some IT experts warn that it also spreads with a Diskcoder.D’s name. Recorded victims are mostly located in Russia and Ukraine together with neighbor countries — Bulgaria and Turkey.

The key features of the malware are: The usage of the optimal mix of AES and RSA algorithms and .encrypted extension appended at the end of the file-name. Besides, victims are demanded to pay 0.05 Bitcoin ransom and faces a risk to expose their credentials.

Mamba ransomware. This extremely malicious program targets German companies and stealthily infiltrates onto computers. The victims are not able to detect the malware since it imitates regular processes while secretly corrupting data. It has been noticed spreading via spam emails or fake updates of regular programs.

Experts noted that hackers used Salsa20 algorithm to encrypt data on the computer. This new feature got rid of vulnerabilities discovered in previous Petya versions. Once installed, the ransomware insists on paying an enormous 1 BTC ransom.

GoldenEye ransomware virus. This malware operates similarly to its original version. It detects whether User Account Control (UAC) is not secured correctly and infects the system. To circumvent highly-protected UACs, the ransomware continuously generates a pop-up asking to give administrative rights and if agreed, launches the malware.

Afterwards, YOUR_FILES_ARE_ENCRYPTED.TXT file is created, stating that the victim has to pay a 1.3 BTC ransom in order to recover its data. Criminals use AES encryption method to attack their victims.

Petrwrap ransomware. Even though this malware is not directly developed by the same group of hackers, the creators exploited Petya’s code in order to obtain revenue illegally. The ransomware is based on the replaced ECDH algorithm of the parent program. Experts say that 2000 computers have been infected already and the number is only increasing.

To infiltrate the virus hackers use vulnerable RDP networks together with the psExec tool. One of the main differences of this version is that it remains silents for 1.5 hours before starting the encryption.

Misha ransomware. This malicious program started its activity in May 2016, when Janus Cybercrime Solutions campaign invited other criminals to reinforce Petya developers. This is another way how hackers generate revenue since there is an entrance fee. The value of the ransom exceeds 1.93 BTC. Thus criminals share huge profits from distributing the malware.

Another important detail is that victims are asked to use a Tor browser in order to gain further information on how to decrypt their files. The ransomware employs AES and CBC encryption algorithms to perform an attack. 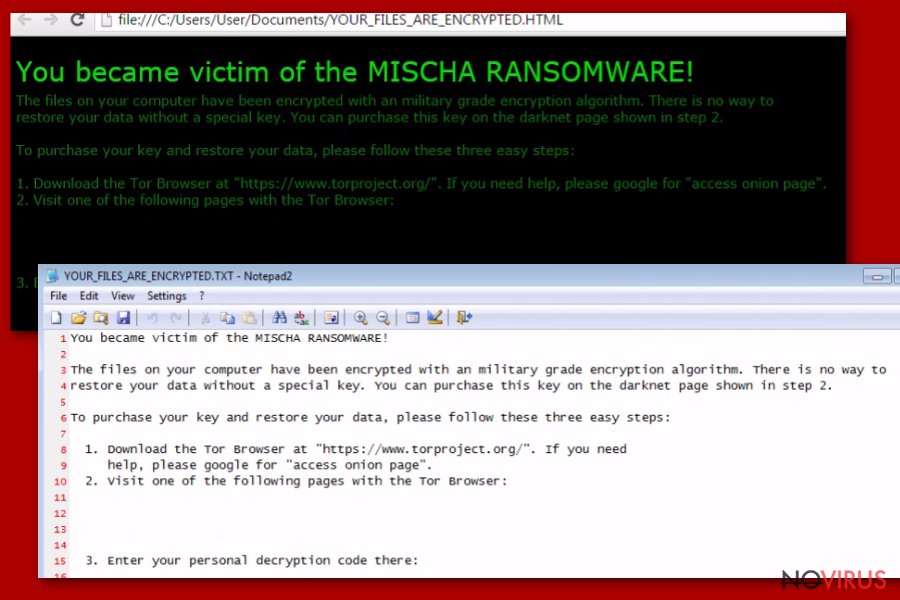 Before proceeding to the removal part, it is vital to be aware of the transmission methods. IT experts have detected that the ransomware spreads via infected email attachments. Once criminals updated Petya virus, they provided wowsmith123456@posteo.net e-mail address to receive further information about payments. However, be wary that it might come in either format.

Furthermore, the virus is spotted traveling via Dropbox link with ‘application folder-gepackt.exe’ attached. After you open it, the virus starts its dreadful job. Recent reports inform that new versions of this ransomware use the CVE-2017-0199 Office RTF vulnerability to infect the systems. Now you know one of the leading channels how Petya malware might attack you. Likewise, it is crucial to be extremely cautious opening the emails received from unknown senders.

Moreover, one of your acquaintances might be infected with the virus. With the help of a malicious computer worm, the virus might come hidden under a file which was seemingly sent from your friend. All in all, it doesn’t take much time to inquire him or her directly. As a result, you can minimize the risk of getting infected with Petya virus.

Additionally, our team suggests downloading MS17-010 and other Microsoft patches to fix SMB vulnerability that is discovered as being exploited by different versions of the ransomware. Of course, use a powerful antispyware application, this way you will fully protect your system from malevolent programs. 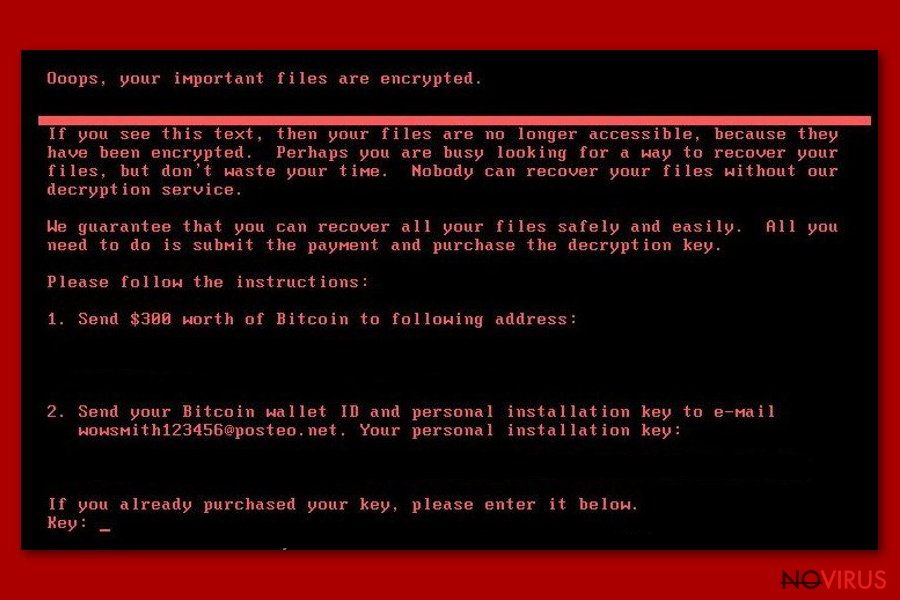 You should take into account that the ransomware has a significantly complex and exquisite structure so eliminating it by yourself might turn into quite a challenge. If you are prepared to remove Petya, you might perform elimination by following the instructions delivered by IT specialists. However, you will need to pay attention and follow each step with utmost precision.

Alternatively, there is another choice – automatic Petya removal. For that purpose, it is necessary to choose a powerful anti-spyware program. Mostly, all of them are created to block and delete various sorts of malware, including ransomware as well.

Additionally, you will need to check regularly whether the software is updated. This is crucial since the program requires to maintain proper protection of your operating system and block you from future virus assaults. Lastly, we remind you to back up your files regularly and cautiously reading emails.

It is strongly recommended to take precautions and secure your computer from malware attacks. To protect your PC from Petya and other dangerous viruses, you should install and keep a powerful malware removal tool, for instance, Reimage Reimage Cleaner Intego, SpyHunter 5Combo Cleaner or Malwarebytes.

You can quickly scan the QR code with your mobile device and have Petya virus manual removal instructions right in your pocket.

Vote in our poll
What method did you use to remove Petya virus?
0.67 % phoned computer support specialists
64.11 % downloaded a security program
18.56 % removed it using free removal instructions
15.78 % used an automatic removal tool and removal instructions
0.89 % contacted support via email
0 % got answer via Ask Us service
Your vote has been submitted!
Vote »
Cannot remove Petya virus?
See the results »