The main facts about Stampado virus

Stampado ransomware virus was noticed being sold on the darkweb only for $39 USD in the middle of May. Let’s be honest, it’s a ridiculously low price of a lifetime licence, so there is no doubt that hackers will not be capable of turning such offer down. For the encryption of target files, this so-called a ransomware-as-a-service virus uses AES encryption method and can encrypt almost every type of files, including video, audio, images, various documents, etc. It puts .locked extension to all encrypted files and displays a lock screen once it finishes its encryption. This lock screen is typically filled with the unique ID and an email address that can be used for contacting the crooks. The current email addresses are ransom64@sigaint.com and paytodecrypt@sigaint.org but there is a huge passibility that they will change in the future. Please, don’t let crooks scare you! There’s no need to contact them and pay the ransom. Recently, IT experts have launched a free decryption tool for Stampado ransomware. You can use it for unlocking your files. However, the first task of yours should be the removal procedure of this ransomware. So, don’t panic about the attack and perform Stampado removal with the help of Reimage Reimage Cleaner Intego.

Usually, ransomware viruses behave similarly. They encrypt victims’ files and inform them that they only way to recover these files is to pay the ransom. However, the developers of Stampado virus are willing to cause even more panic for affected PC users. They, in their ransom note, explain that the files are encrypted with a ‘secret key’, and that the only ones who can provide a decryption key are these bad guys. It seems that victims of this ransomware should hurry up because the timer, which is displayed on the lock screen and presents itself as “Russian Roulette” counts down the time. Victims can see how much time they have until their files, and unique decryption key, is deleted. According to hackers, they can also delete a random file in every 6 hours and destroy the decryption key completely after 96 hours. However, this doesn’t mean that you will never be able to recover your data again. You can remove Stampado and restore your files with the guide which is given below. 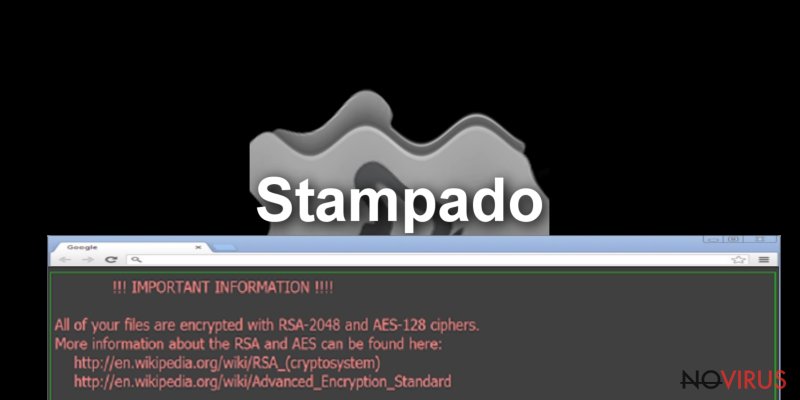 How does the virus spread and how to avoid it?

There are two theories how Stampado hijack can occur. The first theory says that it spreads via malicious emails. Another theory suggests that it might infiltrate computer’s system via exploit kits. If you want to protect your computer, you should pay attention to the protection of your computer and make sure you ignore fake email messages. Crooks can be very persuasive and pretend to be representatives of various institutions, such as Police, State Tax Inspectorate, and other governmental authorities. They convince people that the file attached to an email is very important, and that it has to be downloaded to the system. However, once you download it, the virus sneaks into the computer. Another way how Stampado ransomware might infiltrate your computer’s system is related to exploit kits and Trojan horses. The only way to protect the computer is to use a professional anti-malware program. It can block all parasites before they start causing mess on your system.

How to remove Stampado and recover my files?

The first step for Stampado removal is downloading a reliable anti-spyware, such as Reimage Reimage Cleaner Intego, SpyHunter 5Combo Cleaner or Malwarebytes. However, you have to update it to its latest version to eliminate every little element of this threat. If this threat blocks your anti-spyware, reboot your computer to Safe Mode with Networking. Then, you have to launch your anti-spyware one more time. To know more about issues while trying to remove Stampado ransomware from your computer, follow our instructions at the end of the article.

Fortunately, IT specialists from Emsisoft have already launched Stampado decryption tool. You can download this tool that will help you encrypt all your lost data from here. If your files are still safe, we strongly recommend making their extra copies and transferring them to the external devices, such as USB keys or external hard drives. It’s the best way to protect your information from the loss.

It is strongly recommended to take precautions and secure your computer from malware attacks. To protect your PC from Stampado and other dangerous viruses, you should install and keep a powerful malware removal tool, for instance, Reimage Reimage Cleaner Intego, SpyHunter 5Combo Cleaner or Malwarebytes.

You can quickly scan the QR code with your mobile device and have Stampado ransomware virus manual removal instructions right in your pocket.

Vote in our poll
What method did you use to remove Stampado virus?
35.05 % phoned computer support specialists
15.26 % downloaded a security program
23.21 % removed it using free removal instructions
25.08 % used an automatic removal tool and removal instructions
0 % contacted support via email
1.4 % got answer via Ask Us service
Your vote has been submitted!
Vote »
Cannot remove Stampado virus?
See the results »